Literature / There Will Come Soft Rains 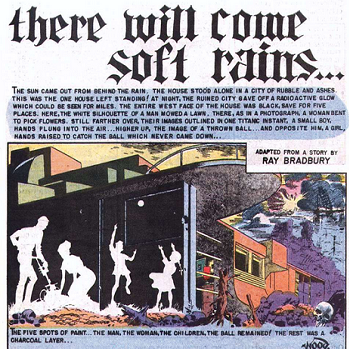 The opening of the comics adaptation

"There Will Come Soft Rains" is a post apocalyptic Science Fiction short story written in 1950 by Ray Bradbury. It tells about the continued goings-on of an automated house. The house goes about its programmed tasks, such as making breakfast and cleaning, sustaining its own processes for days at a time. As the story goes on it becomes clear that a nuclear war destroyed all of the humans. The house runs continuously until it succumbs to decay; no one will ever live in it again.

The name comes from the 1920 Sara Teasdale poem about nature reclaiming the former battlefields of Europe in the years following World War I (but also about how little nature would notice if humans suddenly disappeared) a poem which is recited by the house itself midway through the story. In particular, the poem was chosen to exemplify the fact that life (and in this case, some technology) goes on, even if humans were to suddenly vanish.