Literature / There Shall Be No Darkness 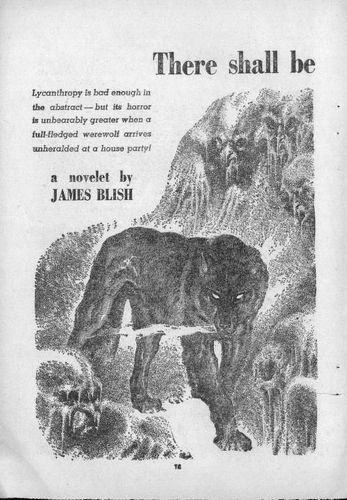 Title page illustration by Virgil Finlay.
There Shall Be No Darkness is a 1950 short story by James Blish. Wealthy eccentric Tom Newcliffe and his wife Caroline invite a group of friends, artists and musicians, primarily, to his remote estate for a weekend get-together. Painter Paul Foote begins to suspect that his fellow guest, pianist Jan Jarmoskowski, may in fact be a werewolf. He is proven correct when Jan transforms into a werewolf on the night of the full moon. Newcliffe and his guests fight their lives against the monster and attempt to fortify the house.
Advertisement:

The story was adapted in the film The Beast Must Die.

Tropes used in this story: