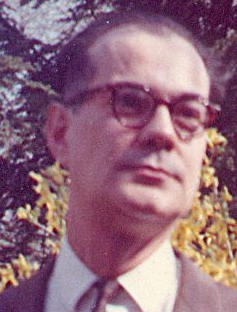 James Benjamin Blish (May 23, 1921 – July 30, 1975) was an American author of Speculative Fiction, perhaps best known for his Cities in Flight series, his Hugo-winning novel A Case of Conscience (the first of the After Such Knowledge series), and for writing the authorized book adaptations of the Star Trek: The Original Series scripts, as well as the second-ever original novel based on the series, and the first published by Bantam books, Spock Must Die! note The first original novel was Mission to Horatius by Mack Reynolds, published in 1969.
Advertisement:

He also wrote a popular series of short stories, collected in The Seedling Stars, where mankind is genetically adapted to live on other planets; that being easier than Terraforming. His story "There Shall Be No Darkness" was adapted for the movie, The Beast Must Die.

He is the source for the name of the tropes Call a Rabbit a "Smeerp" (from the Turkey City Lexicon) and Idiot Plot, and is also credited with coining the term "gas giant", as applied to extremely large planets like Jupiter.

Examples of Tropes in works by James Blish: