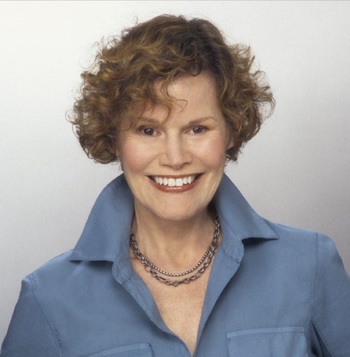 Judith Sussman "Judy" Blume (born February 12, 1938) is an American writer, best known as an author of children's and young adult novels, she has also written several novels for adults. Her works were and continue to be frequently banned because she was one of the first authors of Young Adult novels to write about certain subjects previously considered "adult." The basis of her YA writing has always been pretty much that she didn't want to treat her audience like they were unintelligent: "I wanted to be honest. And I felt that no adult had been honest with me. We didn't have the information we should have had." She is a highly esteemed author in those circles that aren't trying to ban her. And is responsible for providing Nightmare Fuel to a whole generation.

She wrote many books. Among them are Blubber, Are You There God? It's Me, Margaret., and Forever. She has written one series, beginning with Tales of a Fourth Grade Nothing, featuring Peter Hatcher and his Annoying Younger Sibling Farley, universally known as "FUDGE".

Books by Judy Blume with their own trope pages include:

Other books by Judy Blume books provide examples of: