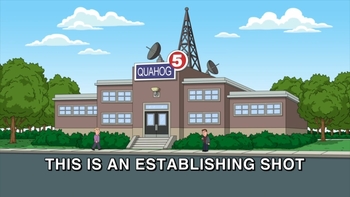 "Man, they're establishing the hell out of this building, here!"
— Tom Servo (on an overly long Establishing Shot), Mystery Science Theater 3000, "Werewolf"
Advertisement:

A wide shot that covers the whole room or background, used to set the scene, and tell the viewer visually where the scene will be taking place. Almost always placed at the beginning of the scene.

All too often the outside of the building — Perfect Strangers, Seinfeld, Happy Days, Cheers, The Bob Newhart Show — with a snip of theme music. Occasionally zooming into one window.

Science fiction shows often use shots of the spacecraft or planet involved.

Establishing shots have fallen out of favor somewhat since the '90s. Movies and TV dramas of the early 2000s (24, Lost, Heroes, to name a few) go right into the action of the scene. Captions or title cards may be used instead to establish location or time setting. The Law & Order franchise uses distinctive title cards to establish time and place.

Often accomplished, especially in older films, with Stock Footage. Expect the addition of a Title In.

Cue the Billiard Shot is a Sub-Trope. Often overlaps with Eiffel Tower Effect, when the establishing shot is of an iconic landmark, and with "Pan from the Sky" Beginning.