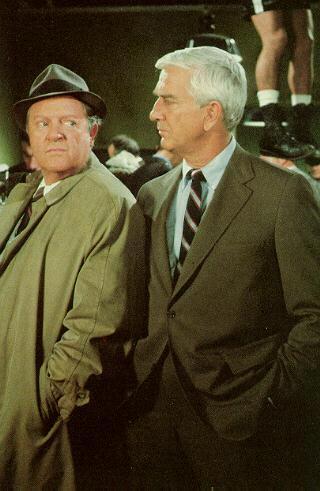 IN COLOR!
"My name is Sergeant Frank Drebin, Detective Lieutenant, Police Squad. There'd been a recent wave of gorgeous fashion models found naked and unconscious in laundromats on the West Side. Unfortunately, I was assigned to investigate holdups of neighborhood credit unions. I was across town doing my laundry when I got the call on the double killing. It took me twenty minutes to get there. My boss was already on the scene."
Advertisement:

After the success of the movie Airplane! in 1980, Zucker, Abrahams and Zucker returned to TV, resulting in Police Squad! (ABC, 1982). A blatant parody of 1950s- through 1970s-vintage cop shows (specifically 1957's M Squad and practically every Quinn Martin Productions crime drama ever made — Police Squad! even uses Hank Simms, the announcer for many QM shows), this Half Hour Comedy featured Leslie Nielsen as Lt. Frank Drebin, and filled its half hour with an incredible panoply of fast-paced and hard-hitting puns, surreal non-sequiturs and over-the-top sight gags of the kind that had become familiar thanks to the ZAZ movies.

Unfortunately, ABC canceled the program after only six episodes, with network head Tony Thomopoulos giving as the reason that the show required the viewer to pay too much attention — a pronouncement that earned Thermopolous and the network a considerable amount of derision (TV Guide called it "the most stupid reason a network ever gave for ending a series"). Ironically, the producers themselves were actually grateful, as the six episodes they made were already stretching their ideas thin and they knew they'd never be able to keep up the level of quality much longer. To this day the show is remembered with fondness by many as a program that respected (and tested) the intelligence of its viewers even while making them roll on the floor with laughter. The entire series was released on DVD in 2006, and on Blu-ray in 2020.

Zucker, Abrahams and Zucker eventually revived the show (and reused many of its gags) in The Naked Gun series of motion pictures.

This show provides examples IN COLOR of:

"Looks like they'll have to ruin their lives up in the Statesville Prison from now on..."