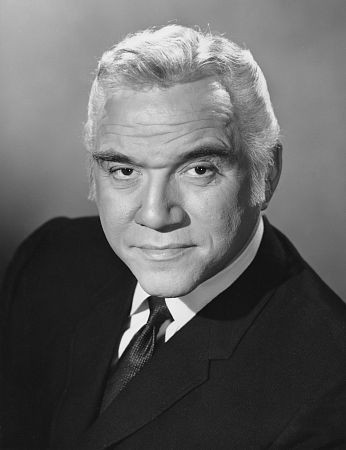 "I never stopped seeing Lorne as my dad. Lorne was a solid pillar for both me and Dan Blocker. I'd known him for more than half my life, and he'd been my father for fourteen years on Bonanza. You just dont quit being a son or a father. I'll always consider him my Pa."
— Michael Landon
Advertisement:

His first major work was as an announcer on CBC Radio where he grew such a high profile that he was dubbed "The Voice of Canada". However, considering the biggest news stories were during the early years of World War II, he was often called "The Voice of Doom," considering things were going badly for the allies at that time.

In addition to his radio voice work, Greene was also an inventor who created a stopwatch that was designed to run backwards to enable announcers to determine how much time they have left before cutting into a different broadcast. On top of that, Greene also narrated various documentaries for the National Film Board of Canada, including Churchill's Island, which won the first Academy Award for Best Documentary (Short Subject) in 1941.

After the war, Greene did various TV work both for the CBC and in the US. He had a small part in the 1957 film Peyton Place. He really hit the big time in 1959 as Ben Cartwright in the classic Western, Bonanza. As the father figure of that series, Greene would star in a production that was #1 on US television for years during a lengthy 14 season run. During that run, Greene would also make his mark as a singer with the story song "Ringo." However, given that he recorded it in 1964, Greene had to later record a forward to explain it had nothing to do with the drummer of the hot new rock band, The Beatles, Ringo Starr.

After the end of Bonanza, Greene would have a more sporadic work history with such as the Disaster Movie Earthquake, the short-lived Private Detective show Griff and a major role in the landmark Mini Series Roots (1977) as Kunta Kinte's first master Squire John Reynolds.

Late in the The '70s, Greene would have his second greatest role as Commander Adama in Battlestar Galactica (1978), a short-lived Sci-Fi series that would become a Cult Classic. After its attempted revival, Galactica 1980, failed, Greene would followup with producer Irwin Allen's final TV series, Code Red, which was essentially Bonanza set in contemporary times with Greene as a Los Angeles Fire Chief with his sons under his command.

After this work, Greene would distinguish himself with nature documentaries such as Lorne Greene's New Wilderness and as the spokesman for Alpo dog food.

And yes, he rather infamously wore a Dodgy Toupee.

Greene died in 1987, just as an attempted revival of Bonanza was showing some promise.

Not to be confused with that other Canadian named Lorne.