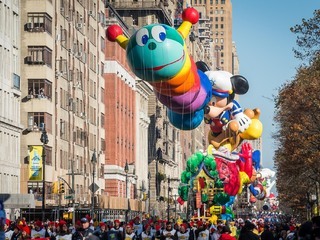 One of the must-watch events of Thanksgiving Day, the annual Macy's Thanksgiving Day Parade (often shortened down to simply the "Macy's Day Parade"; founded as the Macy's Christmas Parade despite the date) is held in New York City every Thanksgiving, presented by the department store Macy's; the parade route always ends at the main entrance to the store's flagship 34th Street location. Launched in 1924, it is one of the longest-running Thanksgiving parades in America.note The absolute longest-running is the Gimbels parade in Philadelphia (currently sponsored by Dunkin' Donuts), which started in 1920; America's Thanksgiving Parade in Detroit was also founded in 1924. Boasting a barrage of spectacularly-designed balloons and floats, spiced with dance groups, marching bands and appearances from celebrities, the parade ends with the arrival of Santa Claus and is considered by many to be the official start of the holiday season in the United States.

In The Roaring '20s, many of the Macy's employees were first-generation immigrants, who wanted to celebrate the American holiday of Thanksgiving with a big street party like the ones they had in their native countries. And thus, the Macy's Christmas Parade (as it was originally named, despite being held on Thanksgiving Day) was born. While there were still floats and clowns, the first few parades didn't have any balloons — their spot in the parade was taken by live animals, borrowed from the Central Park Zoo. The balloons were only brought in because the animals being used in the parade included lions and tigers, which were scaring children along the route.

The years have brought many changes to the event. For example, the parade didn't get any actual Celebrity Endorsement until Harpo Marx appeared sometime during The Great Depression— hard to imagine today, since the parade now runs on star power as diverse as Kiss, Meghan Trainor, and Cicely Tyson. As time goes on, the floats have become more and more elaborate (Cracker Jack's 2014 livecam-featuring float and the specially-designed 2013 float for Cirque du Soleil being the most impressive so far) and along with the balloons, designing and creating them have grown to become an art form. And, difficult though it may be to believe now, the parade wasn't particularly well-known outside of New York until the 1947 film Miracle on 34th Street boosted its reputation, right as it was still recovering from a World War II-induced multiyear hiatus.

From the Turn of the Millennium onwards the parade has increasingly embraced the presence of the internet, including a 2006-07 poll for viewers' favorite floats and balloons on the NBCUniversal-owned iVillage, utilization of the Shazam and Zeebox (now Beamly) apps, and a brief stint with iTunes in 2012. Despite all this, they haven't lost touch with their roots, and are known to acknowledge it during the parade itself, most often during milestone celebrations; in conjunction with that they'll usually bring out a recreation of a long-retired balloon (though nowadays this will mostly be because said balloon will be ported to Universal Orlando the following month for the Macy's Holiday Paradenote which at least one larger balloon (the Rocky and Bullwinkle one) has also taken part in, making for a Negated Moment of Awesome on the part of NBCUniversal).

What's also worth noting is that while it has featured particularly egregious Enforced Plugging and Product Placement, especially from The '80s onwards, the parade (along with Philadelphia's older Gimbels/Ikea/Dunkin' Donuts parade, affectionately referred to as simply "The Philly Parade") could be the Ur-Example/Trope Maker/Trope Codifier for Trope Co. Trope of the Week. And while at least 90% of modern usage of this trope is for egregiously gratituous Product Placement (often during sports programs), the Macy's Parade has been run mostly by Macy's employees since day 1. Even the celebrities that appear have to become Macy's employees just for the week.

The parade can be viewed in person along the parade route, which spans from Central Park West to the Macy's store on 34th Street. The store has special seating that can only be obtained through contests and the like. For those who can't make it, NBC has telecast the parade annually since 1952 to 50 million viewers worldwide, while CBS airs their own unofficial coverage from the middle of the parade route (in fact, the CBS coverage was a factor in the parade's decision to change the route, so that NBC could keep it away from their rival). Both networks provide color commentary from their morning show hosts, though NBC's coverage mainly provided by Today's tag team is more interesting (and rather polarizing depending on your opinion of the hosts) to experience. Meanwhile, because CBS' coverage cannot use the good bits (namely the music/Broadway performances), they substitute their own in the form of extra padding, such as holiday recipes and extended interviews as well as their own music/Broadway performances.

The Macy's Day Parade is the biggest Thanksgiving Day parade, but not the only one. The America's Thanksgiving Parade in Detroit (which also dates back to 1924) preempts the Macy's Parade locally on WDIV-4, NBC's Detroit affiliate,note though at least in recent years, the Macy's Parade has ended up airing on another Detroit station anyway; for the benefit of those who cannot receive neighboring NBC stations WEYI-25 Saginaw, WILX-10 Lansing, or WNWO-24 Toledo; currently WDIV uses their MeTV-affiliated third subchannel to air the Macy's Parade and can be seen in edited form on many syndication affiliates that same day. The Uncle Dan's Thanksgiving Parade in Chicago is also well-known and can be seen locally on WGN, and formerly on the cable station WGN America. And Philadelphia's and Houston's Thanksgiving parades can also be seen outside of their markets via in-state syndication.

More detailed info can be found, as always, on That Other Wiki here.

The parade's fascinating history, along with some of the more interesting bits, was also acknowledged by NBC in a prime-time special aired in conjunction with its 85th anniversary in 2011, and that has been uploaded in its entirety on YouTube