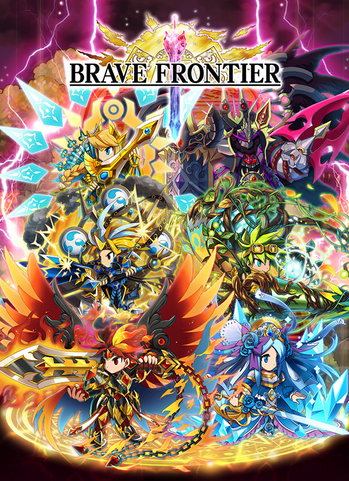 Brave Frontier is an Mobile RPG game developed and published by A-lim in Japan, where you can collect units, fuse them with others to improve them, and evolve them into even better ones. Gumi Asia released the game outside Japan.

You play as a Summoner chosen by the God of the Gate, Lucius, to defeat the Four Fallen Gods, starting with Maxwell the Fallen Creator. Having up to five units in a squad (with one more provided from a friend), you battle against a series of enemies and undergo Quests as you travel through each world. Along the way you can summon or capture more units, gather resources such as Zel and Karma, and acquire equipment called Spheres to slowly build and strengthen your own army of mighty summoned units. Towards the end of the first chapter however, it was revealed that Lucius have a hidden agenda to the point that the summoner must put to an end of his plan. After he is defeated, the demons of the Ishgria then roam loose and this kickstarts the second chapter.

In the second chapter, after the real threat is defeated, the Summoner and his/her companions went into another world known as Ishgria in order to stop the hoards of demons that tries to invade Grand Gaia and save Tilith. Towards the end of the chapter, there is a massive power that looms around Ishgria and it was revealed that it belonged to one of the Divine Ten Gods, Holy Emperor Karna Masta that was sealed in here and it's up to the summoner to finish him off for good.

In chapter 3, despite Karna Masta is defeated by the Summoner, the Summoning Powers that was originally the curse of Karna Masta himself still existed. The power becomes unstable after Karna Masta's defeat and it's up to the Summoner to restore the Summoning Arts by defeating the sealed gods on the Another World and also prevent Karna Masta's brother from being freed from his slumber. Meanwhile, a shady organization known as the Abel Faction tries to stop the Summoner and his/her companions in order to achieve their hidden agenda to take over Elgaia.

Needless to say, even if the main story mostly focused on the Summoner and his/her companions, due to a large cast, there are many stories that focused on them. However, one of the most important story of Brave Frontier is about the War between the Humans and the Gods. Even if most of the story takes place in the Great War, there are parts that also took place in other worlds such as Ishgria, Elgaia and so on. Due to this, Brave Frontier has it's own character page to cover their own various stories.

It is currently available to play on the mobile operating systems Android, iOS and on mobile versions of Windows.

It has been announced

on January 31, 2022 that the Japanese servers for Brave Frontier, along with its sequel and Rexona, are to be terminated on April 25, 2022, with the global servers following on the 27th.