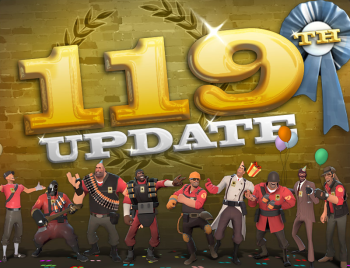 This was meant to be the 100th update.
Valve Time happened.
"I will not celebrate meaningless milestones."
— Bart's chalkboard gag, The Simpsons, "Sweet Seymour Skinner's Baadasssss Song" (100th episode)
Advertisement:

Show pilots are a very tricky process. They are made, and even if they get a chance on the air, the vast majority of them fail within a few weeks. With other shows, they will sometimes build up a dedicated audience that will fail to keep the show alive long enough. Most of the time.

Most full television seasons are between 20 and 26 episodes long. There are various exceptions; shows can run from 13 episodes to well over 40 episodes. With such a vicious market, the ability to reach the 100 episode mark is a rare and coveted thing. So when a show does achieve that milestone, they plan something big to not only draw ratings, but to break out into the three-digit episodes.

Part of the celebration is that pure money is offered with syndication rights, which a general rule of thumb is to have 100 episodes to air in certain time slots like Nick at Nite does. Because the show was already financed and produced, this will bring in the nostalgic viewers without much effort.

This is not inherently just for television series, but any property that has had a consistent run will either celebrate the installment count or in the form of "10 Year Anniversary." This will often coincide with the Very Special Episode, but it could also be Tonight, Someone Dies or a Continuity Cavalcade with Internal Homage, especially when elements (or even the entire plot) of the series' first installment is directly recreated. It may avoid all of that and the installment is just given an additional polishing to make it one of the best episodes of the series.

But no matter what, remaining in the public view for years is an impressive event in any form of media.

Compare Meaningful Release Date. Not to be confused with Milestone Birthday Angst, which is when a character dreads a specific milestone age.

Remember, Examples Are Not Recent.

Cure Dream appears to thank the audience for ten years of Pretty Cure, and that the franchise will continue to grow.

Cure Dream appears to thank the audience for ten years of Pretty Cure, and that the franchise will continue to grow.