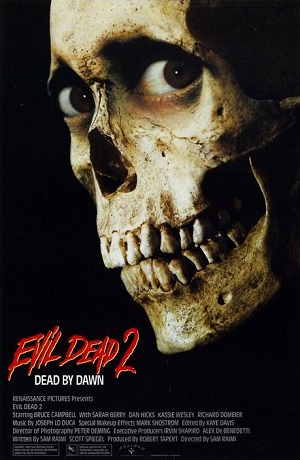 Evil Dead 2 note Occasionally referred to as Evil Dead 2: Dead by Dawn, and written on-screen as Evil Dead II is the 1987 sequel to The Evil Dead and the second film in the Evil Dead franchise. It was directed by Sam Raimi, with the screenplay by Raimi and Scott Spiegel. It was released on March 13th, 1987.

Ashley J. Williams survives the possession of his girlfriend and, along with some new arrivals, manages to fight back the evil demons possessing the house. This film leads straight into Army of Darkness.