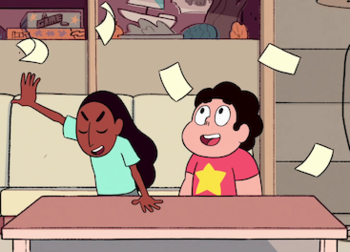 Well, that's one way to clear your desk...
"Then I laid my arm on the counter-top and swept all his books and scrolls off on to the floor."
— Polgara, The Belgariad, Polgara the Sorceress
Advertisement:

Sweeping the Table describes any scene where a character, in need of a flat surface to work on right now, lays their arm on the table and pushes everything off the table in one large sweep. (Alternately, they can upend the table, or pull off the contents with the tablecloth, or similar.) It usually appears in tense moments, such as immediately following an Oh, Crap! or "Eureka!" Moment, and it helps to heighten the tension and urgency of the scene, which is why it tends to be quite popular among creators.

For all its dramatic flair, however, Sweeping the Table isn't exactly practical. After all, sweeping everything onto the floor makes a huge mess, can break anything fragile that happened to be on the table, and can completely disorganize any important documents as they hit the floor and scatter. As such, it's probably not a coincidence that the cleanup of the messy floor is rarely shown, discussed, or even mentioned afterward. Instead, a cut to a different scene or a Time Skip to a later time when the floor is spic-and-span are much more likely to occur... if we even see that room again at all.

Sweeping the Table tends to happen more often in domestic settings or work settings that are likely to be heavily cluttered, like a teacher's desk or a desk in a newsroom. Settings like large business offices or medical settings generally have more potential work surfaces available — operating tables, conference desks, and round tables — and are much more likely to keep these places free of clutter. These things are rarely found in shacks or houses, so the largest surface available in a typical domestic setting is the table, which can often be quite cluttered.