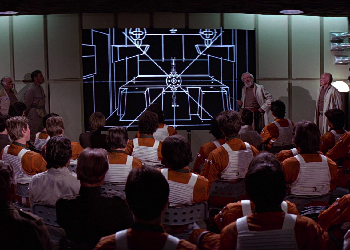 You're required to maneuver straight down this trench and skim the surface to this point!
"Your mission, should you choose to accept it..."
Advertisement:

The briefing before a mission, of whatever form.

In one form of this, the boss gets an aide to turn the lights down and run through a series of slides as he gives the briefing. One of these slides will be "the best photo we could get" of the Big Bad or The Dragon, and there will usually be a line to the effect of "we lost three men getting this out of Commie Land" or wherever.

Military briefings will either take place in a proper briefing room or theatre with relevant information displayed on The Big Board, or consist of a bunch of officers hunched over a map table.

Sometimes this is used for comedic effect when The Plan has to do with something non-military, and often not deserving of such seriousness. (Such as planning out how to get ice for the barbecue). Might be a way of lampshading Serious Business. Occasionally this is done by a person giving a briefing without an audience. Alternately, the comedic effect might come from a serious topic being briefed with whatever random objects are lying around standing in as props.

Allows a character to be Mr. Exposition about what will happen next in the story.

Naturally, these are frequently given before levels in Real-Time Strategy, First-Person Shooter, or Simulation Games.

Occasionally, the Mission Briefing will include This Page Will Self-Destruct and/or Obstacle Exposition. See also: Unspoken Plan Guarantee. Also compare En Route Sum-Up when the briefing occurs after the heroes have set off.

Sylvia briefs Loid of what's going to happen next in Operation Strix after he secured a family for the operation.

Sylvia briefs Loid of what's going to happen next in Operation Strix after he secured a family for the operation.