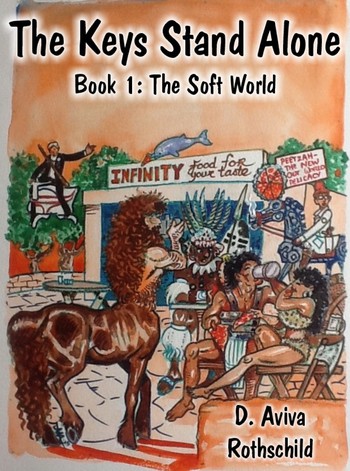 Cover art by Donna Barr.
"Y'know what we'd prefer?" John put his hands on the little man's shoulders, gently turned him around, and gave him a small shove. "If you just got your IRS outta here. We've better things to do than stand about talkin' nonsense with you."
With a very sad look, the little man turned back to him. "Are you gentlemen intimating that you aren't going to pay your rightful tax? I must warn you that on confirmation of nonpayment, I am authorized to employ penalty methods."
Advertisement:
"Penalty methods! Oh, no!" John slapped his hands to his face in an exaggerated show of fear.
The little man said sternly, "Your feeble attempt at levity is noted. I will give you one more chance to pay your entry tax. Otherwise I will implement the penalty methods."
They smirked among themselves. "Go to it," said Paul, folding his arms over his chest.
"As you wish." He dropped his briefcase and backed up.
Then he started to grow. And as he grew, his shape bulged outward, turned purple, sprouted horns and fangs and claws, developed a scaly hide, and grew and grew and GREW—
—and seconds later the no-longer-laughing four were staring up in shock at a giant, slavering purple monster that grabbed John in a hand the size of a phone booth and lifted him towards its mouth!

The Keys Stand Alone: The Soft World is the first half of the long-promised sequel to With Strings Attached, or The Big Pink Job, perhaps the most noteworthy Beatles fanfic out there. Keys is equally as long, as funny, as original, and as epic as Strings, and is just as much of a noncompliant fantasy to boot.

Ten weeks have gone by on Earth, so it's now June 1980. The four have had varying reactions to coming home; as we learn throughout the book, two of them handled the transition better than the other two. But for now, Keys starts superficially like Strings did: the four unexpectedly wake up again on the planet C'hou, though this time they (think they) know what's going on. And they're all delighted to have their magic restored to them.

But nearly six years have passed on C'hou since they left, and the Pyar gods have changed the place almost beyond recognition. The Ketafans and tirin are gone, replaced by a short, pale race of people called the G'heddi'onians. The skahs delight in a world now full of monsters to fight. And there are thousands of outworlders running around, because a tragic mistake on the part of the Pyars allowed a great evil into C'hou, and they've been importing warriors from other worlds to fight it. Unfortunately, many outworlders have arranged themselves in entities called Power Groups, several of which are fierce rivals that spend more time attacking each other than fighting the Black Tower and rescuing the gods from looming extinction.

The Actual Pacifist four are by no means thrilled to have been dropped into this suddenly ultraviolent setting, especially since they're attacked five times the first day they're there. And, like in Strings, they don't know why they're there. One thing they do know, however, is that they need money, and quickly, because the pouch of coins and gems that Ringo still had is now almost worthless. They also learn that they damn well better mask their magic, because everyone is scanning them and finding out just how powerful they are... and reacting accordingly.

Alternating between trying to figure out what's expected of them and earning enough money to survive, they endure various annoying encounters until they finally manage to meet with the much-enfeebled Pyar gods, who tell them they've been brought over to lend their formidable magic to one of the Power Groups and help them defeat the Black Tower. The four really don't want to do this, but they have no choice — if the gods die, they're stuck there forever. Though their distaste is tempered by their promised reward: if they do support the successful Power Group, they'll be given a way to take their magic home with them.

And then things get worse. Much worse.

Read the first chapter on the Rational Magic website

, or the whole thing via Amazon Kindle Edition Normalized Pages.

Keys is just as Troperiffic as Strings was, possibly more so. There is, of course, trope overlap between the two books. Here are some of the more important ones in regards to The Soft World (and there will be many, many more in the individual trope pages).