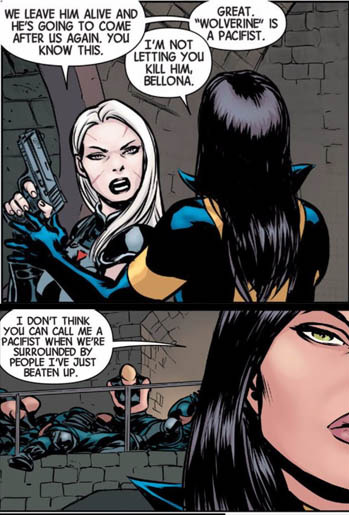 "Don't hit at all if it can be humanly avoided, but never hit softly!"
— Theodore Roosevelt
Advertisement:

A martial artist that is peaceful, disciplined, kind, personable, and probably good with children. If there's an Old Master who isn't a total Jerkass, you can bet they follow the Path of Peace. A Martial Pacifist will often try to solve their problems with words first, and fists a distant second, typically resorting to violence only as a last resort. When that happens, they will mop the floor with anyone dumb enough to challenge them, showing that they also follow the Path of Pieces. Unlike their arrogant counterpart, they will not kill you unless they have no other choice, as killing usually goes against everything that they stand for. Almost universally being followers of good, martial pacifists tend to defend others who are in need of protection.

This trope is Truth in Television: many martial arts schools emphasize the importance of levelheadedness and use of violence only when no other option is available. Exercising self-control over your own body and mind is often an integral part of a practitioner's training, and this includes keeping your emotions in check. As such, you'll rarely hear about a karate black belt pummeling their wife in a fit of rage because they have the self-discipline not to. In fact, there are some martial artists who believe that any use of their skills for competitive purposes is a perversion of the art, and even refrain from sparring (making this the Trope Namer for the Pacifist Dojo, where they were probably trained). In a similar vein, veterans, even high-ranking generals are often much less gung-ho on going to war than politicians who never served in the army or never saw combat might be. They know from personal experience that War Is Hell after all.

When a Martial Pacifist is unrelenting and perfectly willing to kill when they deem that there is no other alternative, this can be a case of Good Is Not Soft. Cool and Unusual Punishment is a favorite trope of the martial pacifist. In darker works, Cruel Mercy can be applied if they prefer not to kill. This can become squicky if the martial pacifist has a broad definition of "alive".

One interesting variant of Martial Pacifist is also an unusual example of Good Is Not Nice: They are only a pacifist as a result of a Heroic Vow or Morality Chain but are earnestly trying to accept these limitations in spite of their nature. When this is the case they are likely also The Fettered or a Noble Demon striving to reform for a loved one. In Black-and-Grey Morality tales or when Played for Laughs, you can expect a lot of Rule Lawyering as to what specifically constitutes "harming others" when they do become frustrated with their (possibly self-)imposed rules. This can even go so far as to slide into Pay Evil unto Evil if a sufficiently evil alignment makes someone fair game, and Batman Grabs a Gun if the rules go out the window when the Berserk Button gets hit. When this happens, it’s a case of Redemption Failure, though this may be averted by violence truly being the only alternative. For the noble demon, it may result in either having to slowly regain the trust of their morality chain(s) or a tragic rejection — the second can be especially tragic when the violence was done to save the loved one.

The inverse of Arrogant Kung-Fu Guy (and often a direct foil to such a character), and just as prevalent among martial artist characters.

Compare The So-Called Coward, Let's Get Dangerous!, Minored In Ass Kicking. See also Technical Pacifist. Contrast Reluctant Warrior, who believes exactly the same things the Martial Pacifist does but is constantly forced to fight and lacks their fighting power and ability to use non-lethal force. Contrast Suicidal Pacifism, where no amount of danger can convince the person to fight, and Badass Pacifist, who succeeds without even the kind of fighting the martial pacifist considers acceptable. If a Martial Pacifist tends to fight rough or otherwise take real risks with the lives of their enemies/allies, they might be a Reckless Pacifist. Their pacifism may degenerate into a Frequently-Broken Unbreakable Vow over the course of a story.

Being the personification of Anarcho-Capitalism, Ancap refuses to start a fight to uphold the NAP. If you are the one that violates it however, it's fair game.

Being the personification of Anarcho-Capitalism, Ancap refuses to start a fight to uphold the NAP. If you are the one that violates it however, it's fair game.