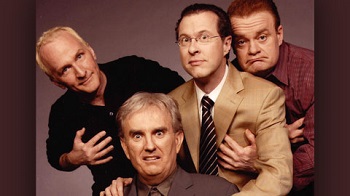 "People talking in movie shows
People smoking in bed
People voting Republican
Give them a boot to the head!"
"And another for Jenny and the wimp!"
Advertisement:

Four-man comedy troupe known for a wild but intellectual style highly reminiscent of Monty Python's Flying Circus and The Firesign Theatre, but with a uniquely Canadian flavor. Formed in the late 1970s, the group stayed together until the late 1980s, followed by a reunion in 2004. The core members of The Frantics are Paul Chato, Rick Green, Dan Redican and Peter Wildman, but like their spiritual predecessors, two women can be counted among their unofficial membership — Mag Ruffman and Carolyn Scott.

Their trademark was off-the-wall and often surreal sketches that took advantage of the power of radio and audio recordings to produce imagery that would have been too expensive or simply impossible in a visual medium, such as the tales of their Canadian superhero, Mr. Canoehead

, who had had an aluminum canoe welded to his head by a lightning bolt. (Attempts to recreate these sketches on television only reduced their comedic impact.) Their comedy was never dumbed down — in fact, they respected and depended upon the intelligence of the audience, as seen in their sketches "You Were Speeding"

. They were also talented musicians, as demonstrated by their numerous novelty songs. They are perhaps best known for their routines "Last Will and Temperament"

and "Ti Kwan Leep", both of which make frequent use of their most famous Catchphrase, "Boot to the head!"

The Frantics made their mark initially in Canadian radio; their big break was in 1981, when they were given a regular slot on the CBC Radio show Variety Tonight. The following year they got their own series, Frantic Times, which began as a brief summer replacement for The Royal Canadian Air Farce but eventually graduated to its own permanent slot. By the time it went off the air in 1984, Frantic Times ran for 113 episodes of inspired lunacy.

Between 1984 and 1986, the Frantics made several unsuccessful forays into Canadian television, including an unsold pilot (The No Name Show) for TV Ontario, and a CBC series called Four on the Floor that lasted for only a single season. (Four on the Floor would later show up on Showtime in the United States, exposing the Frantics to an entirely new audience.)

After their attempts at television success, the Frantics returned to radio for several short series, including a spoof of Anne of Green Gables in 1987 and 1988's eight-part The Frantics Look at History, after which they appear to have gone their separate ways until their 2004 reunion. In between their radio and television efforts, they released several CDs of their sketches and songs. Several of their tracks got extensive play on the syndicated Dr. Demento radio show in the 1980s, spurring the birth of an American following for the group.

The core members re-formed the troupe in 2004 for a stage show (which was released on CD as The Official Bootleg CD: Live at the Tim Sims Playhouse). This was followed by the Older But Wider stage tour, and several appearances on Candian television. Since then they have focused on live theatre shows.

Not to be confused with any of several bands who also have called themselves "The Frantics".