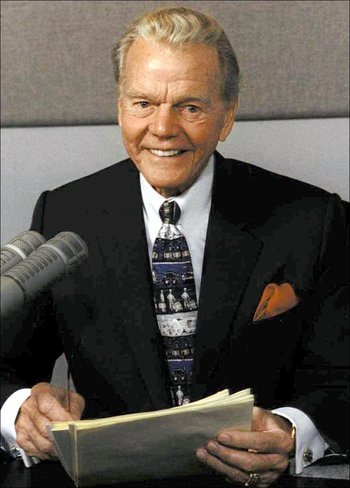 Paul Harvey Aurandt (September 4, 1918 – February 28, 2009), known on-air as simply Paul Harvey, was an iconic American radio personality, most active from immediately after World War II all the way to near his death in 2009.

With his distinctive, fatherly voice and presentation, the Tulsa, Oklahomaa native was mostly known for his daily News and Comment broadcast, which began in Chicago in 1944 and aired nationally on ABC Radio from 1951 to 2008. This program featured his distinctive, rather eccentric sign-on ("Hello, Americans, this is Paul Harvey. Stand by for NEWS!") and sign-off ("Paul Harvey... good day!") phrases, a news segment that came in five-minute morning and 15-minute noon editions, and a five-minute The Rest of the Story segment ("You know what the news is. In a minute, you're going to hear the rest of the story!"), which was spun off into its own separate, evening program beginning in 1976.

Harvey's News and Comment segments, especially during The '90s and onward, tended to have a retro '30s feel, like they would fit in right after one of FDR's "fireside chats". He would often read aloud script instructions ("onto page TWO!") and he would even read out most of the advertisements himself, which often led to strong personal endorsements, as he disliked advertising for products he didn't use. His The Rest of the Story segments were usually about little-known factoids of history, usually focusing on an ironic twist of character or outcome, or an otherwise obscure but interesting fact.

Upon Harvey's death, ABC Radio personnel Gil Gross and Doug Limerick carried on with similar formats, as did Mike Huckabee. These were very short-lived.