You Can't Make an Omelette... 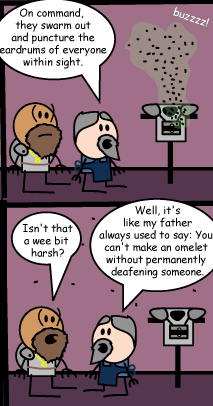 ... without breaking a few eggs.

Stock Phrase that means that in order to achieve something, it is inevitable and necessary that something should be destroyed or sacrificed. It's used as a response whenever someone's confronted about major damage or the like, and is frequently used by those on the cynical end of the Sliding Scale of Idealism Versus Cynicism. Villains in particular, especially Well Intentioned Extremists who believe that Utopia Justifies the Means, are fond of using the line, as it perfectly underscores their disregard for the lives they are destroying or ruining for the sake of their Evil Plan.

The phrase originated with Count Pahlen, one of the conspirators in the coup of 1801 that resulted in the death of Tsar Paul I. (see below in Real Life). It was continued by Egyptian historian Charles P. Issawi: "but it is amazing how many eggs one can break without making a decent omelette".

The people who use this phrase usually don't think they will be the proverbial eggs.

Often leads to Metaphorgotten or [Popular Saying], But....

Compare I Did What I Had to Do or Utopia Justifies the Means. Antonym of Never Hurt an Innocent.

Making the mother of all examples here, Jack! Can't fret over every trope: