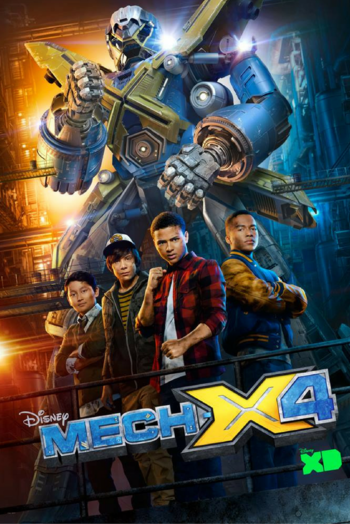 MECH-X4 is a Disney XD live action comedy/sci-fi/adventure series that premiered on November 11, 2016. It's about typical teen Ryan Walker (Nathaniel Potvin), a freshman at Bay City High who discovers he has the power of technopathy - the ability to control and manipulate electronics with his mind. His talent mysteriously awakens MECH-X4, a giant 150-foot robot built by an elusive genius-in-hiding to defend their town against impending doom. Using his powers to act as the robot's pilot, Ryan recruits his two best friends, Harris (Kamran Lucas) and Spyder (Pearce Joza), to man the robot's high tech weapons and defense systems, and his older brother Mark (Raymond Cham) to act as the mechanic. When giant hybrid monsters suddenly begin to descend upon their city, the four must quickly learn to work as a team in order to pilot the robot that is their only hope of saving their town, and ultimately the world, from mass destruction.

You can watch the first episode for free

and watch out for season one spoilers! Episodes are also available to watch on the Disney Channel site

and the Disney XD site

, though watching past episode one requires a cable/satellite provider login. Episodes are also available to purchase on Amazon, Google Play and iTunes.

Ryan: Let's add "proby" to the list of words we never want to hear again!