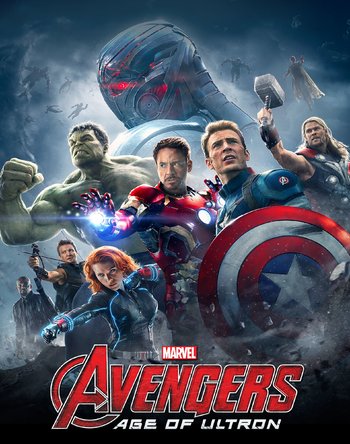 "It's the end. The end of the path I started us on."
"I'm sorry, I know you mean well. You just didn't think it through. You want to protect the world, but you don't want it to change. How is humanity saved if it's not allowed to evolve? With these, these puppets? There's only one path to peace... the Avengers' extinction."
— Ultron
Advertisement:

Avengers: Age of Ultron is the 2015 sequel to The Avengers and the eleventh feature film in the Marvel Cinematic Universe and the fifth installment of Phase 2, written and directed by Joss Whedon.

Following the collapse of S.H.I.E.L.D. and re-emergence of HYDRA in Captain America: The Winter Soldier, Tony Stark (Robert Downey Jr.) reassembles The Avengers to take charge of world security. Realizing the Avengers can't respond to every threat, Tony also revives a long-discarded peacekeeping program called Ultron, an Artificial Intelligence based on Tony himself leading an army of Iron Man drones to maintain world peace. But Ultron (James Spader) evolves beyond his creator's programming and decides the only way to save the world from future threats is to eliminate the status quo and those who protect it, starting with the Avengers. With Ultron wreaking havoc, the team sets off to destroy the rogue AI, encountering new heroes (and villains) along the way.

Two prequel comics, Avengers: Age of Ultron — This Scepter'd Isle and Avengers: Operation HYDRA were released ahead of the film.

If you were looking for the comic of the same name (which has minimal ties to the film itself), see Age of Ultron. If you want the actual comic book storyline the film is based on, see Ultron Unlimited.

"Fine. I'll do it myself."
Feedback

After giving a rousing speech to his troops about not surrendering agaisnt the Avengers, Baron Strucker quietly tells his right hand man their plan to surrender.

I'll Do It Myself

After giving a rousing speech to his troops about not surrendering agaisnt the Avengers, Baron Strucker quietly tells his right hand man their plan to surrender.

I'll Do It Myself