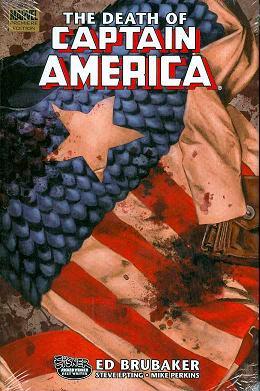 The Death of the Dream
Advertisement:

The Death of Captain America is a Marvel Comics story arc written by Ed Brubaker. It was published from August 2007 to November 2008, and serves as the conclusion to the Civil War arc.

The superhero civil war over the Superhuman Registration Act continues to rage, with Steve Rogers leading the anti-registration Secret Avengers. Meanwhile, Sharon Carter wrestles with her SHIELD-sworn duty to support the Registration Act versus her love for Steve, Nick Fury spies on S.H.I.E.L.D. with the help of Bucky Barnes/Winter Soldier, and the Red Skull has formed an alliance with Doctor Faustus and Arnim Zola for a new plan to dismantle America and its famed Captain.

When the war hits its peak in a climactic battle in New York, Steve Rogers has a crisis of conscience and surrenders the fight with Iron Man. He is arrested and taken to Manhattan's Federal Courthouse to be tried, but on the steps of the courthouse he's suddenly shot by a sniper. Sharon Carter is there to witness the assassination, with chaos and mourning ensuing in the aftermath. While the Red Skull continues to sow more seeds of panic to place the country in his command, Iron Man looks for the best way to reassure the nation while still honoring Rogers' memory. Winter Soldier hunts Iron Man down, believing him responsible for Rogers' death. Sharon Carter struggles with a dark secret about the assassination. And the question on many's mind is, Steve Rogers is truly dead but is Captain America?

The arc was accompanied by a sister miniseries titled Fallen Son: The Death of Captain America, which took the focus off the Captain America supporting cast and instead depicted the reactions of the superhero community, especially that of Wolverine, Hawkeye, The Mighty Avengers and New Avengers, Spider-Man, and Iron Man.

About a year later though, it would turn out that death was just as cheap as it has always been, as Steve Rogers was resurrected in the series Captain America: Reborn, which ran from July 2009 to January 2010.

In promotion for Captain America: The Winter Soldier, the arc was rereleased in March 2014 in the form of a prose novel.

Compare The Death of Superman.

The Death of Captain America provides examples of: