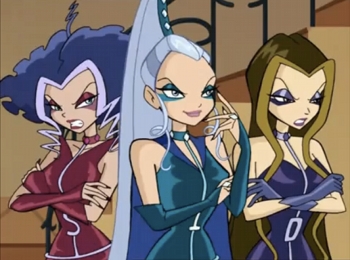 The Chick: You're wearing lipstick!
Dark Nella: I know, and eyeliner.
The Chick: Where are your glasses? [Gasp!] You're evil!
— The Nostalgia Chick reviews
Advertisement:

Villains and evil characters tend to wear excessive, dark-colored makeup on and around their eyes. The key word here is "excessive", as in "singlehandedly keeps a cosmetics company in the black" (no pun intended). There are a few ways for the character to apply the Evil Eyeshadow: there's always some on the eyelid accompanied with mascara to darken and lengthen the eye lashes, and the "excessive" extra can be applied as upper or lower eyeshadow... or both to go the extra villainous mile. The color isn't restricted to just black, but just about any color as long as it's sufficiently dark.

Considering villains tend to go overboard, this is usually also accompanied with lots of extra creepy makeup, and some pale foundation and a dark wig or hair dye to make the character really look like Cesare. Finishing this fearsome facial are Evil Eyebrows, either natural or (probably) plucked and stenciled on.

By now the villain has so much product on their face (and hair too, probably) that they will have a very real aversion to water...not because it's their Weaksauce Weakness, but because a good splash means Your Makeup Is Running. Heroes are advised to avoid making them cry or splashing them, as the resulting fury won't be pretty (Pun intended).

Despite the Trix girls being the page pic, guys can wear Excessive Evil Eyeshadow, usually in the form of Guy Liner. They also tend to be a lot...quirkier...than other guy villains. It's also worth noting that this Sub-Trope of Obviously Evil is so exclusively villainous that it's rare to see even Anti Heroes use Excessive Evil Eyeshadownote Most Anti Heroes who do usually are Nineties Anti Heroes at best. If the character also wears a lot of makeup in addition to the excessive evil eyeshadow, expect them to be a Monster Clown. When the darkness is natural, rather than from cosmetics, it's Creepy Shadowed Undereyes — and sometimes it’s hard to tell which of the two the character has going on, because they have what looks a lot like eyeshadow, but no apparent way to acquire it or time to apply it, so apparently their skin spontaneously generates it.

Sub-Trope of Makeup Is Evil.