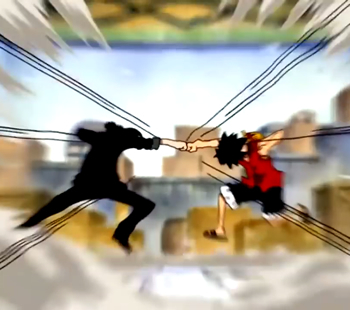 Nope, there is no punchline here.
Advertisement:

You and your rival get yourselves into a fist fight. You each throw a punch simultaneously and, through some wild fluke, strike one another squarely on each others' fists. What happens?

In Real Life, of course, the result would be two broken or at very least very bruised hands/knuckles and the fight would end in a draw. In anime, video games, and other heavily stylized works, on the other hand, the punches cancel one another out and both parties are unharmed. In fact, one or both parties probably did this on purpose. This is a Punch Parry. It may be justified if both punchers have Nigh-Invulnerability or Invulnerable Knuckles, but more often than not the only explanation is the Rule of Cool. If both combatants have Super Strength, expect to see a shockwave / hear a sonic boom when their fists meet.

Often results from Fearful Symmetry if two identical combatants are attacking each other. If done several times in rapid succession, may overlap with Rapid-Fire Fisticuffs. Compare with Cross Counter and Pummel Duel (The Rapid-Fire Fisticuffs variant). See also Blade Lock. Not to be confused with fistbumping. Can sometimes result in a Kung-Fu Sonic Boom if the two opponents are of equal Super Strength.

Asura and Augus duke it out on the moon.

Asura and Augus duke it out on the moon.