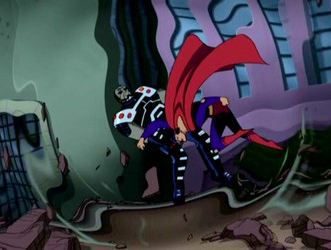 "What we have here is a rare opportunity for me to cut loose and show you just how powerful I really am."
Advertisement:

Let's say we have two opponents facing off. Not just ordinary humans, but Differently Powered Individuals with freakish strength capable of cracking open the freaking Moon like an egg. They take off to the air and engage in a deadly demonstration of Air Jousting, bouncing off each other and ocassionally engaging in Rapid-Fire Fisticuffs, and every impact seems to shatter the very air around them. Suddenly, one fighter manages to catch the other off guard and land one good punch on the other, causing a shockwave that shatters all the surrounding glass and blows away everything and everyone unfortunate enough to be within its radius, even parting the clouds above them.

Thanks to the advent of CGI, fight scenes like this one can now be 20% More Awesome, and even blast off into the Awesomesphere and beyond!

The Kung Fu Sonic Boom is a visual effect that serves to further emphasize just how strong a character is, accompanying especially powerful kinetic impacts like punches and kicks. Unlike its colorful, brighter, flashier cousin you'd see in more cartoonish works, it also serves to portray super-powered fights such as the above example more realistically, sometimes being potentially capable of inflicting collateral damage to surroundings. Anime in particular has its own distinct brand of Kung-Fu Sonic Booms; instead of the usual radial variant, it can also appear as a shockwave shooting out from behind a character like a shotgun blast, usually when said character happens to be the recipient of a super-powered punch, as if 70% percent of the punch's raw kinetic force just travelled through them and turned their bones and insides into smooth puree.

Often combined with Adrenaline Time by alternating between the shockwave rapidly expanding and brief pauses, creating an effect as if there were actually multiple shockwaves from the same blow with each one being bigger than the one before.

The Shockwave Clap is a weaponized version of this trope. Has nothing to do with Guile's signature move from Street Fighter, or Sonic Boom set in ancient China.

Naruto and Toneri fighting in 'The Last: Naruto the Movie'<br>

Naruto and Toneri fighting in 'The Last: Naruto the Movie'<br>