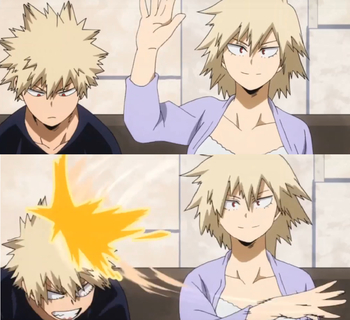 In just about every cartoon, anime, comic book, or video game invented, Hit Sparks are a very common, but rarely acknowledged visual effect employed to let the audience know, as well as emphasize, when something clearly made contact with something or someone. They are purely stylistic and accompany any sort of physical contact, often having snappy, bright and colorful designs like a fireworks explosion to let you know that, yes, Alice obviously, and very clearly, punched Bob in the face, before tripping on a banana peel and super visibly faceplanting on the floor, juuuust in case you missed it. Hit Sparks come in the following flavors:

Compare and contrast Flash of Pain, in which something or someone flashes when taking damage, and Sword Sparks, which commonly occurs during sword fights. May be combined with Hit Stop. See Kung-Fu Sonic Boom for a destructive, more realistic kind of Hit Spark.

As this is an Omnipresent Trope, please refrain from adding examples unless the trope is employed in an unusual way.