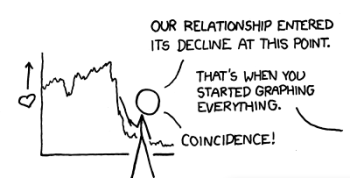 This is why you usually don't measure that.note  "There is also a spike on the Fourier transformation at the one month mark where-" "You want to stop talking right now."
"Just make the whole thing, you know, cooler. [beat] It needs to be about 20% cooler."
— Rainbow Dash, My Little Pony: Friendship Is Magic, "Suited for Success"
Advertisement:

Ah, statistics... The ally of mathematics, business and hard science. How infallible. There seems to be a problem here though... What instrument can you use to measure "awesome", for example? How do you calculate a 14% drop in sadness? And then there are the units, often measured using an Abstract Scale — how many millisobs do you need to get one kilocry?note Assuming there are one thousand sobs in a cry, it would be one billion —"kilo" refers by definition to "thousands of" and "milli" refers by definition to "thousandths of."

This trope is for when a character cites a numerical value for something which is incapable of being measured. It's almost always done for comedy, though it may appear in more serious works as a sarcastic rejoinder.

See also Thing-O-Meter, where the value is actually somehow measurable. Compare/contrast Artistic License – Statistics, which is also about misusing statistics, but with material that actually can be measured. Compare Applied Mathematics and Formula for the Unformulable.

Among the most common uses of this trope is describing somebody as "giving 110%" as a measure of effort.