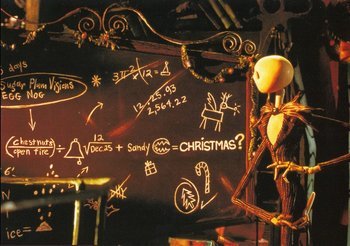 Science and mathematics are awesome. Lots of concepts we know from nature and real life can be described and explained with lovely equations and elegant formulas. Think about those gorgeously complex representations of organic chemistry... No wonder some characters get certain ideas and start thinking that everything can be explained with complex calculations or that everything can be reduced to a refined formula.

This trope is an attempt to use numeric concepts to calculate the uncalculable — things like love or happiness or who-did-it and how-to-get-laid. A character tries to solve a non-scientific problem with science and mathematics and tries to find a formula for it.

They write the formula or equation (usually on a big chalkboard or whiteboard as it is most visually appealing, but a piece of paper will do just as well) and they use not-so-symbolic representations, or they try to count items that cannot be counted together to solve the mystery of the concept they try to grasp. The more mathematical operations they use, the better — think square numbers and third powers, square roots and cube roots, multiplications and fractions, trigonometric functions, integrals... you name it. Sometimes somebody particularly bold might write an academic paper or a whole book in this style.

To count as an example, the formula (or at least part of it) must be seen or read out loud. Can involve the use of an Exposition Diagram to display the proof. But depend on the fact that viewers will be often teased with an Unreveal Angle and won't see the full solution in all its glory.