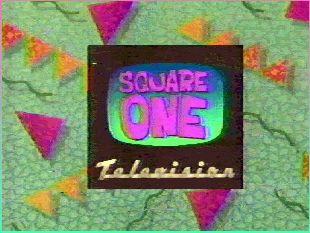 Educational program from the Children's Television Workshop, which originally ran on PBS from November 2, 1987 to November 6, 1992, with reruns airing until October 7, 1994. Square One Television was a half-hour sketch show which featured music videos, game shows, animations and parodies of other popular television programs designed to teach mathematics to children. Ironically, Square One Television was often criticized for being too entertaining. Some people just couldn't believe that it was really possible for something that children actually enjoyed watching to be educational. It is also notable for the large amounts of Parental Bonus (often coming in the form of shout outs to the University of Michigan, where many of the creators matriculated). A number of shorts were the earliest projects for Jumbo Pictures.
Advertisement:

Its stated goal was "To promote positive attitudes toward and enthusiasm for mathematics by showing that: A. Math is a powerful and widely applicable tool useful to solve problems, to illustrate concepts, and to increase efficiency. B. Math is beautiful and aesthetically pleasing. C. Math can be understood by, be useful to, and even be innovated by nonspecialists." For all the claims of being overly entertaining, it did an excellent job in this, presenting an engaging introduction to a fair number of deep mathematical concepts, including Fibonacci Numbers, Pascal's Triangle, Bases Other Than 10, The Golden Section, Imaginary Numbers and Diophantine Equations.

Recurring animated segments featured Mathman (an affectionate parody of Pac-Man in a University of Michigan Wolverines helmet, who existed to demonstrate common mathematical errors, and who would be eaten by his nemesis, Mr. Glitch, in a truly freaky Family-Unfriendly Death for getting answers wrong) and Dirk Niblick of the Math Brigade (a Roger Ramjet-like characternote  Almost all of the creative personnel for the Dirk Niblick segments were Roger Ramjet alums, including writer Jim Thurman (who also did additional voices for both series), director Fred Crippen, and voice artists Gary Owens (Dirk), Bob Arbogast (Mr. Beasley), Joan Gerber (Fluff Noodleman), and Gene Moss (Fold Noodleman). on the far shallow end of the Badass Normal scale, who uses his skills in math to help his friends and defeat scam artists). Every episode ended with part of a five-part "Mathnet" story (featuring a supposed "Mathnet" wing of the Los Angeles, and later New York, Police Department, whose members, Sgt. Kate Monday (later replaced by Sgt. Pat Tuesday) and Det. George Frankly, would use their skills in mathematics to solve crimes). "Mathnet" was particularly filled with Parental Bonuses (largely due to it being a parody of Dragnet) to the extent that collections of each serial were run in prime time on various PBS stations.

The game shows of Square One TV, and their Game Show tropes:

Close Call
Players are shown estimation problems. The two out of the four that each give the closest answer to one get spots in the final round, and the one of them that wins that problem wins the game. Hosted by Arthur Howard in Seasons 2-3, and Luisa Leschin in Season 4.
Piece of the Pie
A Family Feud-like game where the surveys are percentage-based. Differences are that play is in teams of three, 50% is the winning score, and the bonus round is three questions and played to 100 points (100%). Each team also gets one "huddle" during the game to consult with each other. Hosted by Cris Franco in Seasons 2-3, and Beverly Mickins in Season 4.
Advertisement:
Square One Challenge
Visual problems are shown, and the two panel members give their solutions. The two players lock in their guesses as to which ones were correct or a bluff. For the third and final problem, the players wager any amount of their points. The one with the most points after this wins. Introduced Season 3, as revamp of Square One Squares. Hosted by Larry Cedar in Seasons 3-4.
Square One Squares
Players take turns selecting a lettered space on a 3x3 grid (S-Q-U-A-R-E-1-T-V; the center, R, is "free"), and are shown visual problems. The panel of two each give one solution, and the player must correctly decide who is giving the correct one to claim the space. Three in a row of a player's color wins. Hosted by Larry Cedar. Only played during Season 2, but revamped as Square One Challenge for Seasons 3-4.
Triple Play
The two players spin two wheels with numbers (One of which has a "Square One TV" space which is wild), and use them to create an addition or multiplication problem to claim numbered spaces on the hex-formationed board. The player to claim three numbers in positions that form a triangle wins. Hosted by Cynthia Darlow. Only played during Season 2.

100 percent of this page is a production of TV Tropes.