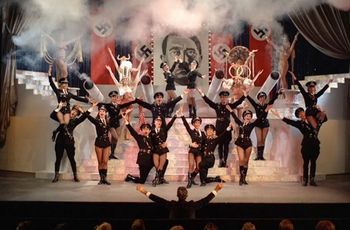 "I was so careful. I picked the wrong play, the wrong director, the wrong cast. Where did I go right?"
Wedge Antilles: Tycho, we're about to achieve a tremendous victory we don't want.
Tycho Celchu: We'll put that in your biography. General Antilles was so good he couldn't fail when he tried to.
— Star Wars: The New Jedi Order — Enemy Lines I: Rebel Dream
Advertisement:

A character's attempt to deliberately fail at some task (usually to fuel some other, hidden goal) backfires when the intended failure proves impossible, or becomes an unwanted success instead; in other words, they failed at failing.

This is usually caused by Finagle's Law at work, where the attempt to fail is so spectacular that it Crosses the Line Twice. Crossing it twice is always "better" than crossing it only once. In these cases, the meta-fail was a result of trying too hard.

In a variation (really more of a Failure Gambit Gone Horribly Right), the person will fail at the initial task as planned, but somehow manage not to accomplish the hidden goal that the failure was supposed to yield. The person is now doubly cursed, as they now have to deal with the fallout from their planned failure without being able to enjoy the rewards of the goal they were actually striving for. May be a result of Misaimed Fandom.

This is a Sub-Trope of Failure Gambit. Compare Fake–Real Turn, with "fake" and "real" replaced with "failure" and "success" respectively. Common for people with Dismotivation. May be caused by a Plague of Good Fortune. If the initial failure would be getting in trouble with the authorities, see Can't Get in Trouble for Nuthin'. Compare with Nice Job Fixing It, Villain. For one going for success and succeeding despite others thinking he won't, see And You Thought It Would Fail. For when one doesn't even try to do anything but ends up winning anyway, see Wins by Doing Absolutely Nothing. Reassignment Backfire is similar where one sends a person they don't like or is expendable on a dangerous or impossible mission with the hopes they'll be killed in action, only for that person to come back alive and successful.

In contrast is the Xanatos Gambit, where the planner is perfectly content with the success of the first part of the scheme or the second part. Another contrast is Saved by a Terrible Performance, where a character who naturally fails to perform a certain task manages to save the day with their natural suck.

See also Reverse Psychology and Black Sheep Hit. Real life versions of this may be caused by a Writer Revolt, which the creators are subsequently forced to work with.

Not to be confused with Gone Horribly Right, where a person does succeed rather than fail, but that turns out to be a bad thing. Also not to be confused with Epic Fail, which is when an unintended failure happens in such sheer magnitude that the failure becomes impressive in and of itself. Inverted Trope of The Show Must Go Wrong, when the characters try to put on a good show and onstage catastrophe ensues. Draco in Leather Pants is similar, where one creates a villainous character, only for the fans to love them.

If you thought this trope had something to do with the bad guys from World War II, you may be looking for Those Wacky Nazis or Adolf Hitlarious.