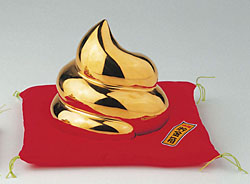 Leela: They're beautiful.
Zoidberg: Ew... you're touching them.
— Futurama
Advertisement:

"One man's crap is another man's treasure" taken a little too literally. Many fictional creatures have various biological functions which produce some sort of waste or other material (i.e. spit, tears, urine, fecal matter, vomit, the list goes on

). Most of the time these wastes are treated like, well, waste, and disposed of accordingly. Most of the time. But for those lifeforms who won the Superpower Lottery, their various waste products, fecal or otherwise, are like gold to other species (or literally are gold).

The reason why the species itself doesn't find this material valuable is that it may be, ahem, common as crap on its homeworld. Face it, it may be valuable, but it's still poo, vomit, etc. Oftentimes a facet of Bizarre Alien Biology, and may lead to Monster Organ Trafficking if someone gets a little too wealth-hungry. Compare Pooping Food, where the waste turns out to be perfectly edible food. If it has healing properties, see Fantastic Medicinal Bodily Product. If it's waste, but still manages to save someone, see Revolting Rescue. Body to Jewel is a specific Sub-Trope that covers bodily fluids being turned into Mineral MacGuffins.

Truth in Television if you consider the useful and unusual applications of real-life animal droppings.

Warning: High concentration of spoilers due to this trope oftentimes being in The Reveal, and always full of Squick. Don't confuse with Polish the Turd; that trope is about making metaphorical "turds" more appealing, at least superficially.

Lizabeth and Kirito manage to find a rare item that can only be obtained with a Blacksmith in a party from a world boss.

Lizabeth and Kirito manage to find a rare item that can only be obtained with a Blacksmith in a party from a world boss.