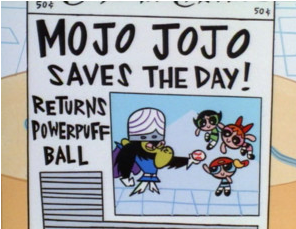 He was trying to kill them at the time, but this happened instead.
"Let us remember that a traitor may betray himself, and do good that he does not intend."
— Gandalf the White (discussing Gollum), The Lord of the Rings
Advertisement:

Basically, the heroes have a problem. It could range from personal, to being vital in their quests. Then an antagonist does something, either accidentally or deliberately but with an unintended effect, that instead fixes this problem nicely. It's like a Kick the Dog, but instead of hurting the dog, it pops one of the dog's dislocated bones back into place.

Say the Evil Overlord decides to smash the hero's Orphan's Plot Trinket just For the Evulz, and then it turns out that trinket was a Power Limiter that the hero wasn't able to break himself (or wasn't aware had that function), and now The Hero lays a No-Holds-Barred Beatdown on the overlord.

This is often Played for Laughs. Sometimes the Minion with an F in Evil is responsible for this.

This trope on its own just has the villain do this independently of the heroes. If the heroes trick the villain into fixing their problem, then this trope combines with either Briar Patching or a Batman Gambit.

May overlap with Dick Dastardly Stops to Cheat if the villain had victory in hand before he did whatever he did.

Compare Hoist by His Own Petard (when the villains foil their own plans), Villain Ball, Bad Guys Do the Dirty Work (like this, only intentional), Poke the Poodle, Phlebotinum Rebel (when the villain creates the hero), Tactical Suicide Boss (when an enemy can only be beaten by exploiting a certain move) and due to the G.I.F.T, Why Fandom Can't Have Nice Things (when fans do it).

Super-Trope to Create Your Own Hero.

This is not villains hurting their own plans or failing to break something (like resistance against them). "Fixing" in this case means solving a problem they did not know existed, or were trying to exploit.