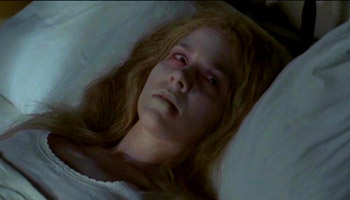 1609, Virginia colony. A blonde pale woman is on her death bed with syphilis. A doctor is bleeding her with leeches, and it's not helping. A priest cloaked in heavy monk's clothes walks into the room. The patient, a prostitute of some repute, tells the priest to get lost. The "priest" uncovers his hood, and the face of the Master greets her. He had visited her the night before, when she had mistaken him as Death. The Master then offers to be her savior; he plunges his vamp face into her neck, and Darla is born.
Advertisement:

1760, London. Darla is introducing her new beau (Angelus) to The Master in his underground lair. Angelus displays a notable lack of awe, looking down on the Master for living in a rat-infested stink hole and having a funny bat-nose. The Master eventually grows tired of Angelus's disrespect and beats him to a pulp. Angelus asks whether Darla would rather look at his own or The Master's face for all eternity. Darla looks lovingly at Angelus, then helps him up, and they leave the sewers together. One of the Master's flunkies tries to stop them, but the Master waves him off. "It won't last. I give it a century, tops."

Romania, 1898: Darla and co. pays a visit to the gypsy family who cursed Angelus with a soul. As Drusilla slaughters the gypsies in the camp, Darla promises she will spare the man's wife and children, who are in a wagon, if he agrees to fix Angel. Spike stumbles out of the man's wagon with blood on his mouth and belches. Darla glares at him, realizing that Spike already ate the family. D'oh.

Speak of the devil — Darla dials Angel's number, calling from Lindsey's office in a state of despair. Lindsey enters and demands to know who Darla's talking to. Angel, on the other line, hears a struggle, followed by a gunshot. Later, Holland is reviewing the tape from inside Lindsey's office showing a security guard getting shot in the struggle. Luckily, Darla only made it a few blocks before getting re-captured. The guard's death has been handled Wolfram & Hart style, so Lindsey won't have to worry about it. Holland thinks Lindsey is too emotional when it comes to Darla and takes Lindsey off the project, which is henceforth "terminated." Lindsey registers what this means.

China, 1900. It's the Boxer Rebellion. Angel, dressed in old dirty clothes and exhausted from travel, sneaks up from behind Darla. She unsheathes a knife, asking whether Angel is too cowardly to kill himself and expected her to do it for him. Angel wants things to be as they were before. In 2000, Lindsey is walking to his car when Angel surprises him with a rope around his neck. With this in mind, Lindsey is happy to be of assistance: Darla's been taken to an abandoned bank at Figarro and Ninth. There's a place where the firm takes care of such things. Angel arrives in the Angelmobile just in time to save Darla from Wolfram & Hart's hitmen.

More cross-cutting between China and the present day. Back in 1900, Angel wanders amongst the rioters and finds a missionary family huddled in an alleyway. He hears Darla calling him, and quickly back-pedals out of the alley and greets her before she spots the family, saying there's nothing but bodies down there. Later, Angel returns to Darla's house to find her waiting for him. Darla, fuming, unveils the missionary family's infant child in a basket (Darla went back and killed the parents). She takes a step back from the basket, waiting for Angel to prove himself.

Darla lies on the sofa in the Hotel, while Angel asks his team for a minute of privacy. Darla asks Angel to return her 'favor' by taking away her pain, and presents her neck to him. Whoa, whoa! Angel, taken aback, tells Darla that she damned him by turning him into a vampire, not helped him. Darla switches tactics, offering Angel to take his "vengeance" then. Angel says that he can't. Back in China, Angel cannot bring himself to feed off of the baby. Darla is disgusted with him. Angel grabs the basket and leaps out the window, his destiny fulfilled.

Darla runs from a pursuing Angel, and gets to the front doors of the Hotel. Darla tells Angel not to look for her again, before running out into the morning sun. Angel powerlessly watches her leave again.