Film / Snakes on a Plane 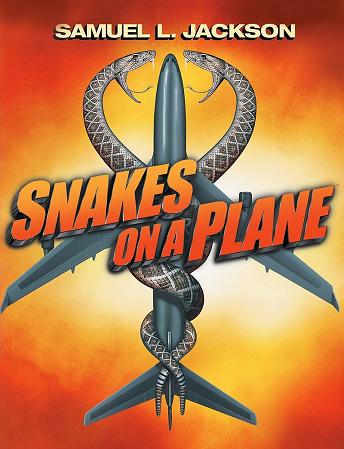 The 2006 "Psychological Thriller" Snakes on a Plane does pretty much Exactly What It Says on the Tin. Sean Jones (Nathan Phillips), who becomes an accidental witness to a murder of a prosecutor by international gangster Eddie Kim and his men, gets hunted by Kim, so the FBI puts him under the escort of agent Neville Flynn (Samuel L. Jackson) as he flies from Hawaii to California to testify. Kim and the gangsters come up with an unusual method of trying to bring the plane down: they unleash motherfucking snakes on the motherfucking plane during the flight to try and bring it down before it gets to California. Lots of people die, sacrifices get made to save lives, and Flynn kicks reptilian ass.

The movie turned out exactly as ludicrous as the premise and title sound, and it reveled in its So Bad, It's Good-ness, with cheesy glowing effects, Gory Discretion Shots, and many snakes. When the studio wanted to give it a serious title (Pacific Air Flight 121) and turn it into a more serious Action Horror film, Jackson suggested they change it back when the absurd title gained popularity with Internet nerds and became a huge online meme. The studio responded by turning the film into a dark-comedy horror/action film, refilmed several scenes to add new lines (including the now-infamous page-topping quotation), and had the rating upgraded from PG-13 to R to accommodate the newfound audience. While the nerd-hype failed to translate into large-scale box office success, Snakes on a Plane did ultimately make a profit.

Enough is ENOUGH! I've had it with these monkey fighting tropes in this Monday-to-Friday article! Everybody press the 'Back' button! I'm about to open some new freaking pages.
Feedback