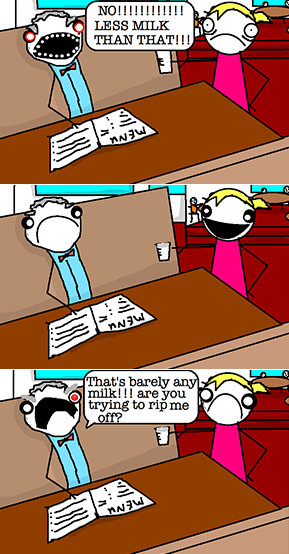 A nightmare customer who belittles and mistreats service staff. Particularly notorious in restaurants, but can make an appearance in any kind of sales or service establishment. This customer takes the maxim of "the customer is always right" completely to heart, to the point where it reaches the extreme of "all workers must be wrong."

In a restaurant, they might make excessively long or complicated orders, demand the kitchen Hold the Unsolicited Ingredient, and they will send the food back repeatedly if it is not made to their overly-precise specifications. If they perceive any aspect of their experience to be inadequate (in their view), they will take it out on the poor employee who has the unenviable job of waiting on them.

Some take it as far as fraud, using Loophole Abuse to get away with returning clearly used items. In a restaurant, they will consume all or most of a meal and then use some pretense to bully the restaurant into refunding their money or providing another portion. And you'd better believe that they'll chew out the waitstaff and/or management if they don't get their way.

Generally a Comedy Trope. To qualify, the complaints must be completely specious in the eyes of the audience. If the customer has a legitimate complaint and it's the staff who are being jerks, see Burger Fool or Soul-Sucking Retail Job.

Truth in Television, and there are entire

to examples of these unpleasant persons. Also, this Trope is not exclusive to food services—although as many examples on this page can showcase, this specific environment can allow for some impressive (and impressively disgusting) payback. See also Obnoxious Entitled Housewife.

Not to be confused with the Fire-Breathing Diner, who may have every reason to complain (after he gets a drink of water).

SpongeBob finally gets the pizza to the customer, but he rejects it because they didn't bring him the drink he also ordered (despite him not saying he wanted one earlier).

Alternative Title(s): The Customer Is Not Always Right

SpongeBob finally gets the pizza to the customer, but he rejects it because they didn't bring him the drink he also ordered (despite him not saying he wanted one earlier).