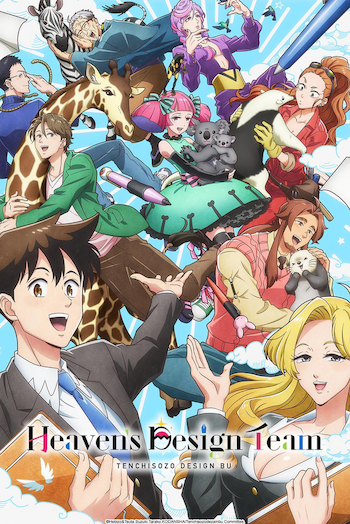 In the beginning God created the heavens and the earth. He created light, water, plants, and animals to inhabit the earth... Well, at least, that was the intention, before he got too lazy to design the animals and decides to delegate this task to the Heavenly Creative Agency's Design Department.

Thus begins Heaven's Design Team, or Tenchi Sōzō Dezain-bu (天地創造デザイン部) in Japanese, a comedic Edutainment manga that offers hilarious explanations on how certain animals got their unique features. Hint: it is almost always a result of the team's wacky attempts to fulfill their client's equally wacky requests, often resulting in chaos.

The manga is written by Hebi-Zou and Tsuta Suzuki and illustrated by Tarako, and serialised in the Seinen magazine Monthly Morning Two from 2017, with six tankoubon volumes having been released to date. Kodansha USA began releasing an English translation of the manga in October 2020. It received an anime adaptation by Asahi Production that started airing on January 7, 2021.