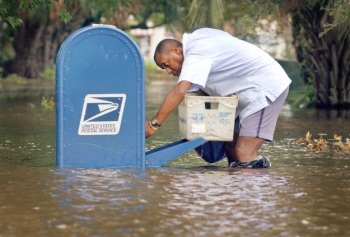 "I'll deliver these letters if I have to scuba-dive down to the damn mailbox!"
"Neither snow, nor rain, nor heat, nor gloom of night stays these courageous couriers from the swift completion of their appointed rounds."
— Greek historian Herodotus, on the Persian mounted postal couriers. Adapted into the unofficial motto of the United States Postal Service.
Advertisement:

Fiction has a tendency to treat the mailman as an unstoppable force. Come downpour, blizzard, flood, The End of the World as We Know It, or Big Friendly Dogs, your mail will still be delivered. Sometimes, it's even exaggerated to the point where the mailman will find you and deliver the letter no matter where you are in the world. They may even be the Flying Postman.

Keep in mind that this isn't merely about unstoppable characters who happen to be mailmen; it's about mailmen who display impossible persistence in the process of delivering the mail.

The source of the page quote itself is nearly a direct quotation from the description of the Persian messenger system in The Histories of Herodotus written between 450 and 420 BC.