Please Note: Due to the comic changing main characters at the end of Volume 2, tropes for the first two volumes of the title are separate from tropes for the third and fourth volumes. As such, all tropes relating to Miles Morales will be collected under the tropes for Volumes 3 and 4. This page will also feature unmarked spoilers for the Peter Parker-focused portion of the series. 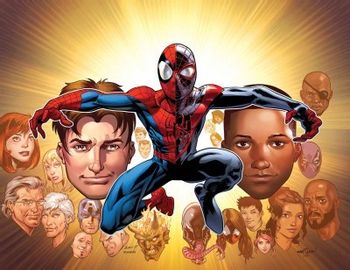 After a six-month Time Skip following Ultimatum, which killed off many Ultimate Marvel characters and initially left Peter's fate ambiguous, the series was re-launched as Ultimate Comics: Spider-Man until the comic reached its 150th issue (counting both pre- and post-Ultimatum issues) and returned to its original numbering and naming format for 10 issues, just in time for a crucial crossover event: The Death of Spider-Man, which was Exactly What It Says on the Tin. The series ended with issue 160, followed by the miniseries Ultimate Fallout. (Peter eventually got better, but he stopped being the protagonist of the series at that point.)

A third volume came out starring Miles Morales, a new character introduced in the pages of Ultimate Fallout. This series was published under the title Ultimate Comics: Spider-Man, Volume 2, or Ultimate Comics: All-New Spider-Man with new numbering. In 2012, as part of the 50th anniversary of Spider-Man titles, the first 616 and Ultimate Universe crossover, Spider-Men was launched, which saw the 616 Peter arrive into the Ultimate Universe and meet Miles, who never got to meet the original Spider-Man.

In 2014, The fourth and final volume, called Miles Morales: Ultimate Spider-Man, began in the wake of the Cataclysm Crisis Crossover. This title ended with #12 and led into Secret Wars (2015), at the end of which, Miles Morales was imported directly into the Marvel Comics Universe thanks to the intervention of Molecule Man. This was done as a part of the All-New, All-Different Marvel line-up, not only starring in All-New, All-Different Avengers, but also starring in Spider-Man (2016), by the same creative team and with Miles as the main Spider-Man with the original Peter Parker serving as a mentor for the younger web-slinger. The crossover Spider-Men II provided a coda for Ultimate Spider-Man and the Ultimate Marvel line as a whole.

There's also the 2005 tie-in game, which introduced Ultimate Beetle and was marketed as being in continuity with the series but this has since been the subject of Canon Discontinuity. A version of the game's plot and events was adapted between USM #123-128 ("War of the Symbiotes"). And on the subject of video games, Ultimate Spidey also made an appearance in 2010's Spider-Man: Shattered Dimensions as one of the four playable characters (on home consoles). Not to be confused with the Ultimate Spider-Man animated show, which has a different premise; though as with most Marvel adaptions it does have some Ultimate Universe elements incorporated into it.