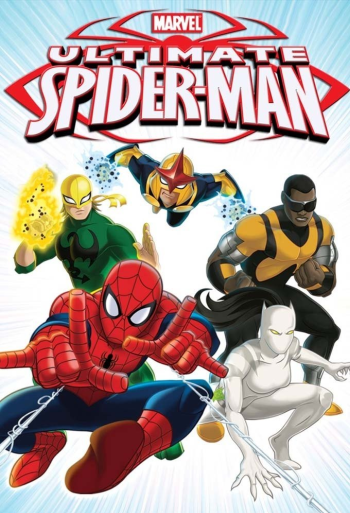 Spider-Man and his Amazi— er, Ultimate Friends Clockwise from behind Spidey Iron Fist, Nova, Luke Cage, and White Tiger
Loki: The Trickster tricked... by a MORTAL!?
Thor: He is no mere mortal. He is the Man of Spiders!
Spider-Man: Close enough.
Advertisement:

Ultimate Spider-Man is an American animated series based on the superhero character published by Marvel Comics. Paul Dini (of DCAU fame), Brian Michael Bendis and Man of Action Studios (of Ben 10 and Generator Rex fame) were involved in the making of the show, which premiered April 1, 2012 as part of Disney XD's Marvel Universe block. The executive producers consist of Jeph Loeb and Stan Lee, and is the replacement series for the fan-favorite The Spectacular Spider-Man, which was cancelled when Sony lost the TV rights to Spider-Man (movies, on the other hand...).

Not related to the Ultimate Spider-Man comic book, outside of the usual incorporation of Ultimate Marvel elements. Although confusingly enough, it has its own comic book tie-in.

There's a recap page in progress. Here's a trailer.

Wolf Spider expresses his plan to destroy every Spider-Man in the Multiverse.

Wolf Spider expresses his plan to destroy every Spider-Man in the Multiverse.