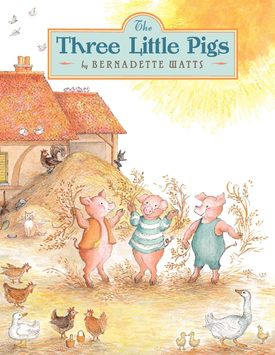 Wolf: Little pig, little pig, let me come in!
Pig: Not by the hair on my chinny-chin-chin!
Wolf: Then I'll huff, and I'll puff, and I'll blow your house in!
Advertisement:

"The Three Little Pigs" is a Talking Animals story that was written in the 1840s. The young pigs of the story's title move out of their mother's house to seek their fortune, but it is hindered by the fact that there is The Big Bad Wolf out there with intentions of eating them. The first little pig builds his house out of straw, but the wolf blows it down and eats him. The second little pig builds his house out of sticks and meets the same fate. The third pig, however, being the brains of the outfit, builds his house out of bricks, which the wolf cannot blow down. The wolf makes several attempts to trick the pig into coming out of the house, but fails each time. Finally, he tries going down the pig's chimney, but is cooked in a pot that the pig puts there, and ends up eaten by the third pig himself, though several adaptations have the first two pigs escaping safely from the wolf and hiding inside the third pig's house.

Among the many retellings that have been made of the story, perhaps the best known is Walt Disney's 1933 cartoon version. Activision also created a game based on the story called Oink!

Various versions of "The Three Little Pigs" and related tales can be read here.