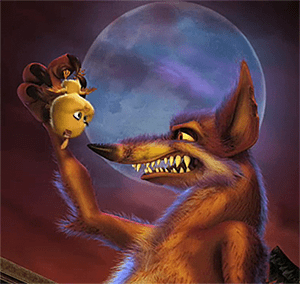 "Cook her while I have the little one for an appetizer. You know, 'cause I'm a meaner."
Advertisement:

In fiction, particularly if the prey can talk, carnivores are often evil, and all the heroes are herbivores. The predator's desire to eat the prey makes the predator a villain, or at least, a Designated Villain. For instance, if the heroes are mice, often Cats Are Mean; if the main character is a squirrel, then Dogs Hate Squirrels. And even if the main character is a dog, that is the Villain Protagonist at best. In works involving talking animals, carnivores almost always fail to catch their prey. (Sometimes, their prey actually defeats them!).

This is a common way to deal with predators in talking animal fiction. This trope may be one of The Oldest Ones in the Book, despite predators serving a vital ecological role (no apex predators=too many herbivores=ecosystem completely collapses), or needing to eat meat to live. On the other hand, to the mouse, what the owl is like inside isn't as relevant as that it's trying to eat you. When the story focuses on a prey animal, there's not a lot of ways to keep predators from being monstrous. Sapient Eat Sapient is a justified case of this, since there are sapient predators that know what they are doing and sapient prey that has a right to live. The more anthropomorphic they are shown to be the more likely they are to overhunt. There are still a few ways to avoid this though, the most famous being with the fish-eating characters who are often spared sympathy thanks to their targets being non-sapient (see No Cartoon Fish for more about that trope).

Subtrope of Good Animals, Evil Animals and Always Chaotic Evil. Often seen in conjunction with Carnivore Confusion. Can overlap with Humans Are the Real Monsters, and maybe even Humans Are Cthulhu (particularly in Xenofiction). Goes hand-in-hand with Super-Persistent Predator, Herbivores Are Friendly, Scavengers Are Scum. Contrast Predation Is Natural. In-universe might explain the Xenophobic Herbivore. May be one of the reasons why Reptiles Are Abhorrent—note that lizards and turtles, two groups that include herbivores, get to be protagonists more often than snakes and crocodilians, which are all predators. At times some predators appear as a non-anthropomorphic third party in a conflict either because they are the only true animals or because they have no interaction with the established individuals in which case they may be neutral characters just as likely to eat the bad guys- if not more so. Certain predators have their own pages, such as foxes.

This trope is practically never Truth in Television, obviously enough. Very few predators have ever been observed to engage in apparently deliberate cruelty, and herbivores are usually much, much more violent and dangerous than the existence of this trope would suggest. After all, if a carnivore loses a fight, it can always run off and catch something easier for dinner, but if a herbivore loses a fight, it becomes dinner. Please do not list Real Life aversions - nature averts this by default, playing it straight is by far the more remarkable.