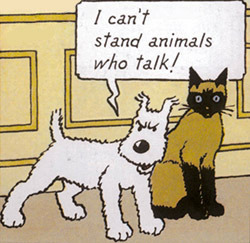 Barks the talking dog!
"Be afraid.
Be very afraid.
Be bloody terrified.
After all, you've just entered the household of the Happy Talking Spiders."
— From a Walkthrough

Many cartoons have them — some animation companies have made their entire core casts out of them. Very simply, these are animals who talk.

This page will only include characters that, despite their ability to speak, are still animals in almost every other way, particularly when it comes to instincts, priorities and motivations. They very rarely wear clothes, and they are often vocally proud of the fact they aren't human. They may even choose to talk to no one but a single human, who typically finds this very disturbing. They may even break the Fourth Wall and talk only to the viewer.

A good comparison: Ralph the mouse (from The Mouse and the Motorcycle) is a Civilized Animal; he lives in a mousehole, dodges cats, and runs around naked (save for his fur), yet he enjoys motorcycles and regularly talks to the human boy Keith. Mickey Mouse is an example of Funny Animal; he lives in a house, drives a car, wears clothing, and sprays his garden with pesticides (think about that for a second). They can easily hold down a conversation with any human member of the cast. They are a lot better at it than the Speech-Impaired Animal. It's not like every human Speaks Fluent Animal either; the animals themselves are able to talk and that's just the way it is.

Like many Speech Impaired Animals and Nearly Normal Animals, many Talking Animals lack hands and walk on all fours, negating the possibility of performing many human tasks and behaviors. A few examples are bipedal if their species is flexible enough. However, when required by a joke, the Talking Animal can sometimes act like the more anthropomorphic Civilized Animal or Funny Animal.

Since these are otherwise normal animals who are able to talk, the issues of Furry Confusion don't usually come up. The issue of What Measure Is A Nonhuman, however, is far more likely to affect a Talking Animal than a Funny Animal. That said, Talking Animals are likely to voice just what they think about humans...

The Fairy Tale is more likely to feature a talking animal than a fairy. (Although they do often turn out to be humans under a curse. Or even ghosts.)

Polly Wants a Microphone is a specific sub-trope for when in fiction, most animals can’t talk, but parrots can talk instead of just mimicking human speech.

Lots of verbal jokes involve talking animals, with the humour usually deriving from a trait of that animal or a pun based on the word for the animal. A common subversion of these jokes is to replace the punchline with something along the lines of "Holy crap, a talking horse!" See also Not in Front of the Parrot.

Fun fact: As ridiculous as it sounds, there are some books like Charlotte's Web that were banned in some areas of the U.S. because they had talking animals in them.

Don't expect the problem of the animal's vastly different (or completely absent) vocal tract to be explained.