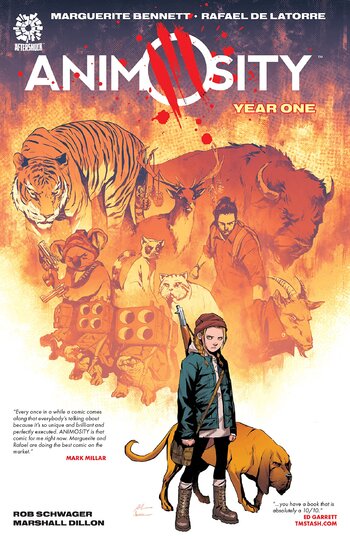 What would happen if every animal in the world suddenly gained sapience, and was able to talk and think like a human? Would they live in harmony with us? Would we learn from them? Or would they take revenge for everything we've done? Every species we've driven extinct, every pound of meat we've eaten, every kill a hunter's shot, every bug squashed under foot?

The Wake did just that— every creature, from dogs and cats and whales to bees and mayflies woke up one day. Since then, society has collapsed— animals outnumber humans greatly, and they rule the world. Caught in the middle of all of this is a child from New York City named Jesse Hernandez and her dog Sandor, a bloodhound who loves her more than anything in the world. The two of them, along with a group of animals, are trying to travel to California, where Jesse's half-brother Adam North, her only surviving family member, lives.

Animosity also has two spin-off works: Animosity: The Rise and Animosity: Evolution, both of which focus on Adam, in a San Francisco ruled over by Wintermute, an ambitious and mysterious canine. The Rise is a completed trilogy, and Evolution is currently ongoing.

Animosity: the Rise and Animosity: Evolution contain examples of: