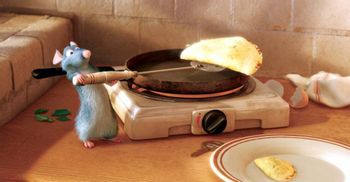 Ordinary animals in fiction have a significantly increased intelligence. Not necessarily the Talking Animals. Not the Civilized Animals and Funny Animals. Just the wild and domestic animals encountered in stories where humans are the main characters. Such animals can frequently clearly understand everything humans say, understand human emotions, read, figure out how to solve problems on their own, and so forth. This is also true for cases in which the animals can talk to each other (so the audience can hear them) but are common animals in the eyes of any humans in the film.
Advertisement:

Beyond that, they will, if they belong to a human, also circumvent their natural instincts in order to aid or protect their humans.