Literature / Revenge of the Sith 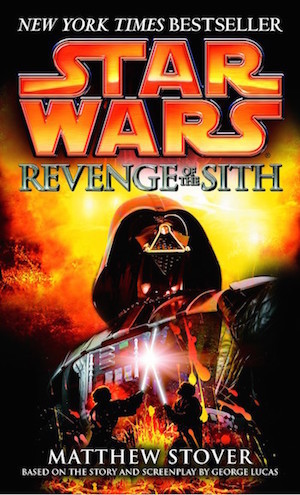 "This is how it feels to be Anakin Skywalker. Forever."
The dark is generous, and it is patient.
It is the dark that seeds cruelty into justice, that drips contempt into compassion, that poisons love with grains of doubt.
The dark can be patient because the slightest drop of rain will cause those seeds to sprout.
The rain will come, and the seeds will sprout, for the dark is soil in which they grow, and it is the clouds above them, and it waits behind the star that gives them light.
The dark's patience is infinite.
Eventually, even stars burn out.
Advertisement:

Continuing the tradition of pre-released Star Wars novelizations, Matt Stover, author of other Star Wars Legends books such as Shatterpoint and The New Jedi Order: Traitor, was commissioned to write the final book of the prequel films. Revenge of the Sith thus covers the events of Anakin's last days as a Jedi, but does more than merely recap them. Stover's book is often told in the present tense and three times from the second-person perspective and makes both the action and non-action events highly psychological.

Unusually for a novelization, it frequently references other Legends works, such as the events of Labyrinth of Evil, Star Wars: Clone Wars, and Stover's own Shatterpoint. The book also introduces new subplots as part of actions seen in the film and restores deleted scenes. This, combined with Stover's rich writing and the book's insights into the characters and their motivations, means that many fans consider the book a superior work to the film; it's earned praise even from known detractors of the prequel trilogy. However, like the other novelizations of the Star Wars films, any material expanding upon the events of the film or contradicting the film is considered to be in the Alternate Continuity of Star Wars Legends following the Continuity Reboot of 2014.

In addition to being the novelization of the third part of the Prequel Trilogy, Revenge of the Sith is also the center of the unofficial "Dark Lord" trilogy, continuing the story begun in Labyrinth of Evil and concluded in Dark Lord—The Rise of Darth Vader, both by James Luceno. Together, the trilogy acts as the unofficial end to the original Clone Wars multimedia project that began following Attack of the Clones in 2002* much of which would be superseded canonically by the later The Clone Wars series and associated works, though none of the three novels are branded as such.

Not to be confused with the junior novelization of Revenge of the Sith (written by Patricia C. Wrede), although that is a good read in its own right.

In addition to tropes inherited from the film, this book includes examples of:

The dark is generous, and it is patient, and it always wins—but in the heart of its strength lies weakness: one lone candle is enough to hold it back.
Love is more than a candle.
Love can ignite the stars.