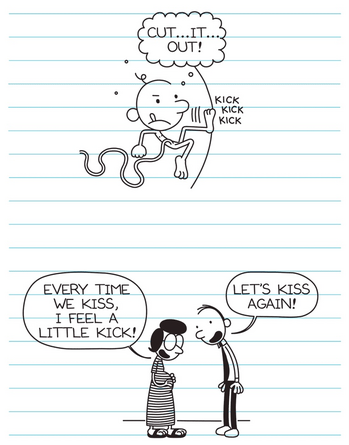 Midway through pregnancy, a mother may begin to feel the fetus unconsciously moving in her uterus. These first sensations are usually a faint flutter, but they soon become more pronounced. As her baby increases in size and strength, she may distinctly feel it stretch, squirm, roll, punch or kick inside her. These stirrings can be felt by someone else if they touch her abdomen, and strong moves can make her belly visibly bounce or shift for a moment.

For many, this is among the most joyful experiences of pregnancy. For eager soon-to-be parents, this evidence that their soon-to-be child is developing and healthy is blissful. For the mother and those close to her, this can sometimes mark the point when the expected baby begins to feel "real." They knew there was something inside her growing belly, some vague invisible thing that will eventually resemble a baby. When they recognize that the thumping inside her comes from tiny knees, elbows, fists and feet, suddenly they realize it already seems like a baby, even if they cannot see it yet. It vividly appears in their imagination: it becomes cute.

The experience can be a way for a father to bond with both mother and baby, for a young child to understand that a younger sibling is on the way, for other mothers to remember how it felt, or simply to share the phenomenon with friends. Moments like these can be Played for Drama to highlight tenderness, intimacy, wonder, joy, love, connection and more. The way a pregnant mother invites someone to feel her baby kicking — and their reaction — can show how they feel about one another, the soon-to-arrive baby, or the human life-cycle itself.

And like much of pregnancy, it can be equally amazing and inconvenient for the expectant mother. Her changing body can feel strained or tender, so getting roughly pummeled from the inside can take her breath away. She might endure restlessness and Sleep Deprivation as her enlarged uterus makes it difficult to get comfortable, so if the occupant of that uterus throws a late-night party using her cramped abdomen and pelvis as a dance floor, it's going to keep her unpleasantly awake. Because they are ultimately harmless, such aggravations may be Played for Laughs to show the awkwardness and discomfort of pregnancy in an amusing or endearing way. They may be comically-Exaggerated so that the kicks are powerful enough to assault someone else, like the Bumbling Dad.

Also, it is not unusual for onlookers (or the mother herself) to find it faintly grotesque or disturbing. They might compare the fetus to a Parasitic Horror or Chest Burster trying to wriggle out. Proud parents might not appreciate these comparisons, but this uneasy reaction is surely one inspiration for Womb Horror.

It is generally considered rude to touch someone without their permission. Some people bizarrely lose this inhibition in the presence of a pregnant woman and touch her belly before asking. If the mother-to-be Hates Being Touched, this is offensive. Even if she doesn't, it's obnoxious. (Don't do this.)

Compare Hand on Womb, which signifies announcement of a pregnancy.