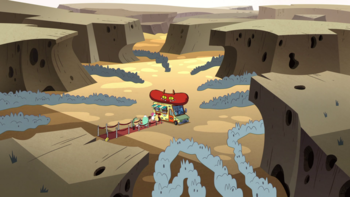 "I'm British; I know how to queue."
— Arthur Dent, The Hitchhiker's Guide to the Galaxy

People standing in line to do various tasks. Usually a comedy trope, the joke being one or more of the following:

Frequent butts of this gag are banks, amusement parks, the Department of Motor Vehicles, or any similarly over-bureaucratic institution.

If people plan for a ridiculously long wait in line, it's a Ticket-Line Campout. If the queue uses sequential tickets instead of simple position in line, it's Take a Number.

When trying to get a Thunder Blazz-esque drink for Sylvia, Wander encounters rather huge lines.

When trying to get a Thunder Blazz-esque drink for Sylvia, Wander encounters rather huge lines.