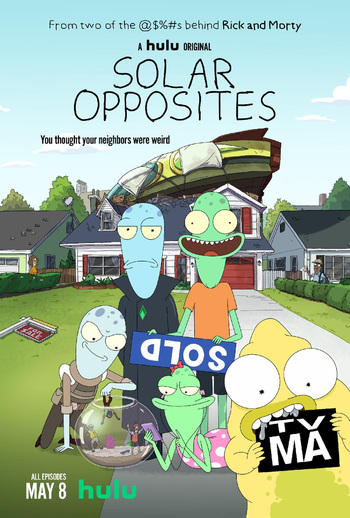 Solar Opposites is an American adult animated science-fiction comedy web television series created by Justin Roiland and Mike McMahan. It premiered on May 8, 2020

One day, the utopian planet Shlorp was destroyed by an asteroid. Before this, 100 adult Shlorpians and their "replicants" were given living supercomputers called Pupae and escaped into space searching for uninhabited worlds to take refuge. One group (consisting of Korvo, Terry, Jesse, and Yumyulack) lands, of course, on Earth in a suburban area somewhere in America. After settling in, they disagree on whether this is awful or awesome while trying to outwardly fit in as your regular garden-variety nuclear family.

What's the worst that could happen?

A second eight-episode season was released on March 26, 2021, with a Christmas special being released in November of the same year. The show was also renewed for a twelve-episode third season in June 2020.

Tropes associated with this series