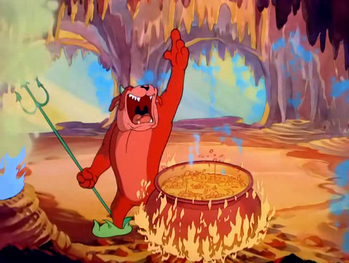 Satan makes one mean Sincinnati Chili.
"This is a place where eternally
Fire is applied to the body
Teeth are extruded and bones are ground
And baked into cakes which are passed around."
— Squirrel Nut Zippers, "Hell"
Advertisement:

A Fate Worse than Death that in some stories happens after death, just as Fluffy Cloud Heaven is The Theme Park Version of Heaven, Fire And Brimstone Hell is the Theme Park version of Hell. Generally, if it isn't an Ironic Hell, Hell Is War, the Bloody Bowels of Hell or A Hell of a Time, it's this. And even then, you can expect the odd brazier and stalactite.

Common features of such a location include underground cavern-like decor, plenty of hellfire and lava, and red-skinned devils with horns and tails poking the souls of sinners around with their pitchforks. Sometimes, it's actually shown to be underground literally, but most of the time it's Another Dimension.

Note the curious discrepancy; despite rebelling against God, devils in hell are doing some kind of job with awe-inspiring diligence and consistency. This job arguably makes Hell someplace someone doesn't want to go; which theoretically helps God. Some theorize that Hell is thus part of God's plan and still under His employ, which may or may not put his infinite goodness into doubt depending on who you ask; or else devils get something out of torturing souls. Mana, perhaps. Or maybe they're just sadistically amusing themselves. Another popular theory in fiction is that it was originally a prison, but Satan took it over; subverting its mechanics.

In works that feature many Circles of Hell, the Fire and Brimstone Hell is often near the top, with other hellish realms below.

For information on how this trope came about, see the Analysis page. Note that brimstone is the old English word for "sulfur".

Thank you for staying with us this Duration: ETERNITY here at Hell bar and grill resorts.
For our entertainment today, you have been selected for the red hot poker experience
and hot peal, with complementary sulphur, acid and salt for your skin, scalp and face.
Enjoy your eternal punishment, because you deserve it.

"The Goddess of Spring"

"The Goddess of Spring"