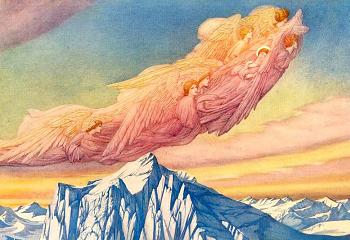 Flights of angels escorting a soul to Heaven
As it is written:
What eye has not seen and ear has not heard,
and what has not entered the human heart,
what God has prepared for those who love him,
this God has revealed to us through the Spirit.
— St. Paul (quoting Isaiah 64:3) in 1 Corinthians 2:9-10a (New American Bible)
Advertisement:

The problem lies in Heaven being the pinnacle of perfection, the ultimate reward, so most authors and filmmakers end up feeling not quite up to the task of portraying it (not to mention, one person's heaven is another person's Hell). The easy way out is to use Fluffy Cloud Heaven, The Theme Park Version of Heaven.

When that doesn't fit the theme of the setting, the solution is to not show it at all, save perhaps as a tunnel of light for the departed to enter. Or an escalator. An older version was to have an angel show up as Psychopomp, perhaps after disputing with a devil trying to bear the soul off to Hell. In comic form, Winged Soul Flies Off at Death implies entry here.

A less simplistic and more dramatic approach is as a "nebula of lights", with each soul a star, each angel a comet, and God the Quasar in the center. Another alternative is to use an allegorically benevolent 'purgatory' in the shape of your grandparent's house (complete with apple pie in the oven) or whatever place you were happiest. Even then, those "living" there will inform the new arrival that what they're seeing is a kid-friendly level so that they aren't blown away by the sheer awesome, or because they'll be resurrected shortly and it wouldn't be right for them to feel unhappy on Earth.

Still more forms of Heaven include reliving parts of your life, so you will be reunited with all your loved ones and experience your most fond memories over and over again. Heaven may also be one of glorious combat, where you can be a warrior for all eternity. However, it might also turn out that Heaven is a downright nightmare for one person. Whatever the depiction, Heaven is universally associated with the sky, an association known as Heaven Above.

Hell, of course, doesn't have this problem and is aaall about the visceral and gory Discretion Shots, so you'll see absolutely Dante-esque hellscapes to put Mordor to shame. The Underworld, being neither particularly pleasant or unpleasant, likewise doesn't have this problem, though if sections of it are equivalent to Heaven, we probably won't see the whole thing.

Frequently, those who've gone into heaven are revealed to have Died Happily Ever After via various means. However, you probably shouldn't try to get them to come back... you wouldn't like the results. See also/Compare A Form You Are Comfortable With.

Not be confused with that film

with Cate Blanchett in it.