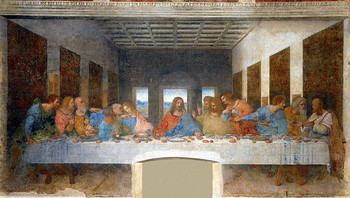 "Very truly I tell you, one of you is going to betray me."
The Last Supper is a 1498 painting by Leonardo da Vinci depicting one of the most famous scenes from The Four Gospels: the dinner Jesus Christ had with his followers before being betrayed and killed. Currently held in the Santa Maria delle Grazie in Milan, the painting depicts Jesus in the center of the table reaching for bread to bless while surrounded by his twelve disciples, who are all in shock upon learning that one among them is a traitor.
Advertisement:

Although not named in the painting itself, the individuals in the painting are (from left to right) Bartholomew, James the Lesser, Andrew, Judas, Peter, John, Jesus, Thomas, James the Greater, Philip, Matthew, Thaddeus, and Simon. The individual identifications are based on annotated copies made by Leonardo's students.

Among the most famous paintings ever made, The Last Supper has established norms for depicting the event itself, Jesus, and the twelve apostles. It continues to live in the public consciousness through the many imitations of the painting in pop culture, which are known as "Last Supper" Steals.

The Last Supper provides examples of: